This will be my first attempt at a traditional paper zine. I got my hands on a copy of Adobe InDesign a while back, and did experiment with making a six-issue digital zine, which, as it turns out, is a whole lotta work! (http://tinajett.com/spoon) I can already see lots of other topics that can incorporate illustration, collage, and photography. It's the perfect way to flesh out ideas I have that, until now, haven't found the right medium.

This first paper zine is tentatively called "A to Zine: A Useless-Trivia Look at the Alphabet". Over the course of more than a year, I sporadically illustrated each letter of the alphabet using a topic that started with that letter. They were done digitally on a blackboard image, and I lessened the opacity of the illustration a bit to make it look more like chalk.

I thought about the usual course of making prints of each letter, but then it seemed that turning the project into a zine some day also made sense. So, here we are!

I'm envisioning one side of the spread to have the illustrated image, and the other side to have both a general fact about the topic, and then a "Did you know?" tidbit that's a little more zeroed-in.

What I know so far:

What I don't know:

Finally got back to working on (and finishing!) the zine. Here's what I ended up doing:

Aside from the too-long staples, I am really pleased with the way the zine turned out. The remaining first-run batch is up for grabs in my Etsy shop.

Thanks to Grace for a great intro to a huge field of possibilities! 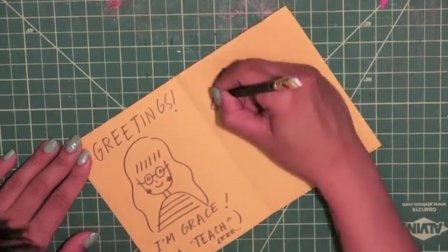 Zine and Be Seen: Promoting Your Work Through Self-Publication
Grace Danico