A map of Singles

Singles is a French little village where I spent my weekends between 3 and 8 years old.

The names are written in French but the map name. Here are the translations and some explanations :

In 1999 we had a big storm in France. Many forests have been destroyed and a lot of trees fell on the roads. The village is surrounded by forests so this county kept scars of this time.

At the entrance of the village there was this old Chalet. As you can imagine in a child imagination this can create a lot of stories !

In the center of the village, there was a fountain filled by tadpoles. One of our favorite games was to catch some of them, keep them in a bucket and watch them grow.

I remember laying in the herbs next to the garage watching the sky with my dad, waiting for shooting stars. A family of Glowing worms joined us. In my 7 years old eyes it was magical living beings !

The West road leads to "Le Pays Inconnu" (Nowhere Land). As I never been further in this direction I don't know what's behind.

The East path leads to "Les Bois" (The Woods) where my Dad spent a lot of time watching the birds and the trees.

The South road leads to "La Guinguette" (The Tavern) where we went down to eat Pork on the Spit once a year.

In this part of France there are lot of mountains so the road is doing a lot of laces.

The specific stone from Auvergne is the Volvic Stone that is in a dark grey color. The Church and some houses were made of these.

In the foreground we can see the Puy de Dôme ( ... that is in reality much far away than that place but the city where I spent my weeks was at the foot of this mountain)

I represent a child playing with a kite because it is one of my best memories of this time.

Our country house was separated from the other houses and was quite big in comparison because we had a barn next to the dwelling.

On the left of the habitation I represented the old well, the big tree, the vegetable garden and the rusty swing. It's fun to see how big can be our memory, I have perfect image of all this things !

For the imaginary part I represent legends I heard when I was a child. The ghost of the cimetery, the witch flying over the mountains, the Gevaudan Wolf. I wanted to add more but I didn't want to surcharge the image.

For the Map Name I put some cards, a picture of my dad and a cockchafer. Games, Family and Nature.

I had a lot of fun doing this class ! I learnt a lot of things, thanks a lot Ira Marks !! 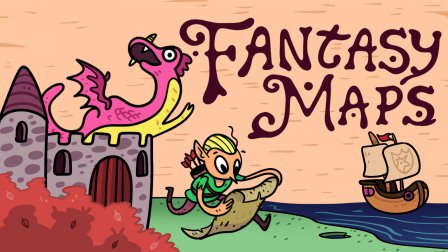