A lifetime experience before starting college...

I gained about 63 views from sunday.  Not bad!. My strategy was basically share the post in facebook and twitter on different times.  I tried to use different call to actions to engage the reader.

I received some feedback. Not many people commented or shared. Perhaps the fact that people needed to register in skillshare to be able to comment, it may have not appealed to them. I had my doubt on wether to ask them literally on the post/tweet for feedback. Should I?.

As for twitter,  I used hashtags such as #lifetimeexperience #college so my tweets may get more viral. I believe facebook may have been more effective than twitter. It's probably because i have way less followers than fans. maybe?.

A LIFETIME EXPERIENCE BEFORE STARTING COLLEGE....

Once you graduated from high school, you probably have your career chosen to study at college. Probably you have lived with your parents throughout your childhood before starting college.

In some countries such as Venezuela in my case, given the opportunity, you would travel overseas for a period of time to learn a new language before starting college. I was lucky to have gained that opportunity. Right after high school, I went to England to live for few months. I lived in Cambridge with a host family adapting to a whole new culture and values.

My goal was that while learning the language, I would enjoy my time; as much as I could. I knew 17th years would not come again. This year allowed me to grow and challenge myself adapting to a new culture and new family. I was living in a house with 10 people.  I would have never thought that I would ride a bicycle during 8 months as my "transportation" medium to go to school, clubs, work, etc.

The opportunity to work in colleges that by only being a sort of waitress, I would learn the value of work adapting to new rules and cultures. I felt as If I were in Harry Potter's dinning hall but instead of being the actress, I would be the waitress. Still, it was enough for me to be part of it.

Besides that, I had the opportunity to travel in such economic flights around Europe. That was the most amazing experience. I was amazed how come with a flight of few hours, you can travel to another country that people speak another language, culture, traditions, food, and historic behind.

Fun/crazy fact: I gained weight about 10 pounds during my stay in Cambridge. My metabolism and my food habits were not used to the new habits I had there. Now, looking at those pictures, I discovered myself that I had to be SO HAPPY fulfilled living this experience that I did not stop enjoying because of this.

After almost a year, by the time I had to return back to my country, I knew already that I was capable to leave in another country adapting to a new family, culture, traditions and much more...

I recommend this lifetime experience to any young recent graduate from high school to have this opportunity. There are many organizations that offer an "exchange" year either volunteering or exchange program. Check these links for info if interested:  Rotary Club. EF school. Go Abroad.

8 years later, I still keep in touch with my host family and the friends I made during that time.

Check this collage below illustrating the different experiences while my stay in Cambridge. Below you can view; my bicycle, my house during Christmas with my roommate, coworkers and the dinning hall where I worked, friends from different countries. Visits to Paris and Italy. 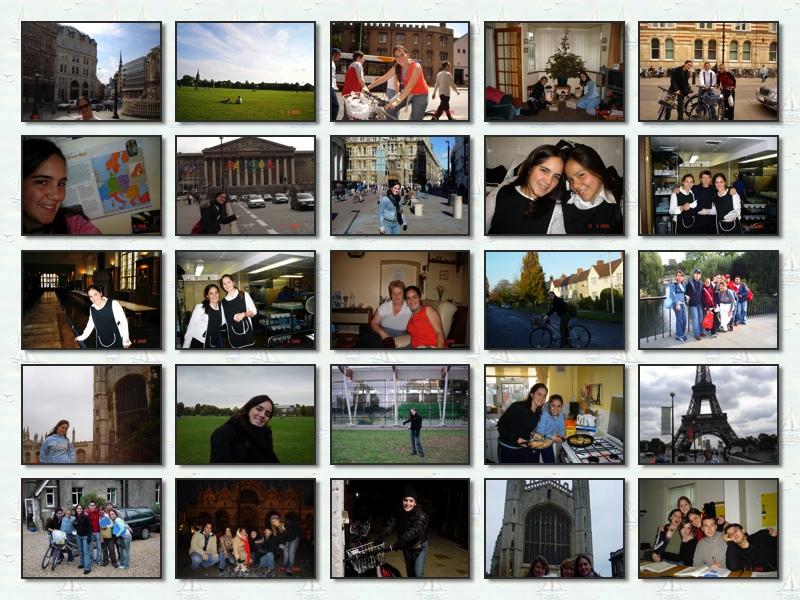 Given the opportunity, would you do it?.

**New to blogging.  Working on it.  That's why, your feedback/comment counts :)