A Freyja Does a Design... sorta

I will admit I did this work in school. In February. In a flurry of "I am in an accelerated degree and have a month to do all of my branding" mixed with "I am in a place where I need my medication refilled and my doctor won't return my calls" place.

Spoiler alert: I ran out of meds.

This logo was born from me going bonkers.

Here's the collateral I came up with for that class. I used my friends' names to fill in. I didn't do any work for them (yet, but I have ideas for stuff to make to help support their festival in June) but I was like, "Well, why not just chuck them into this because I'm an uncreative person?"

As for the octopus, if I were to be any animal other than my human meat shield that I am now, I'd be an octopus. They can get into tight spaces, and solve such complex problems that we would automatically think over them. (We'd be wrong.) There was an octopus that outsmarted aquarium keepers for weeks. Fish in one tank kept disappearing. They set up cameras, finally. The fish were disappearing because AN OCTOPUS kept crawling out of its tank, crossing the hall to the fish tank, stealing a fish to eat, and going back home!

And that's why I chose to make an octopus my logo! 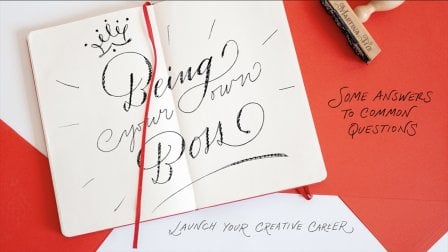 Be Your Own Boss: Strategies for Launching Your Creative Career
Martina Flor