I don't remember much about the old 80's horror flick C.H.U.D., about mutants/monsters living beneath New York City and coming up to eat people, but it must have made an impression on me since it was the first thing I thought of when I saw this sewer cover tutorial.

I decided to offset the friction bumps by selecting a ring of bumps using the ellipse tool, cutting it, pasting it to a new layer, then using the transform tool to rotate it. I repeated that for the next layer in as well.

I decided to go with two holes along the edge rather than 4 holes in the top.  I made them pretty much the same way except I:

I also added some blue filtering, adjusted levels, contrast and brightness to darken the image

Lastly, I added the blood spatters and bloody hand prints. 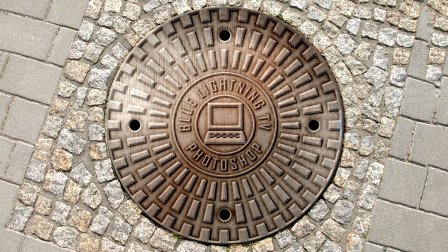