I wanted to use masking fluid over a more sustained period of time rather than odd projects. I really liked the random but textural qualities it could provide.

For me I felt the watercolour set I used was not the right medium to explore this technique where there was a emphasis on the Indigo aspect. By the second day I was applying the masking fluid more confidently with larger shapes and playing line too. It was pretty straightforward at this point and I felt no great anxiety

I wanted to push myself a little further, incorporating what I'd explore the previous day with a decorative motif. Parts of that pattern are a little lopsided but overall I enjoyed this one with the added bonus of blending in the paint to create a faded effect.

Spurred on by this victory I thought why not try a piece with more elements. It was obvious after I'd taken the masking fluid off there wasn't enough contrast and I had to decide how to turn this around. I did have a panic so I went off and did something else. I ended up using little crosses, which worked well in the negative spaces

On these days I wanted to move away from the rather static approach and introduce more movement. I think I could have spent more time refining the masking fluid linework to make them look 'prettier' but I was quite impatient to see the finished version. As a result I used posca pens to plug the gaps.

The next day I used a new dip pen, one which allowed the masking fluid to flow better. Thi was much closer to what I had in mind. I was a bit worried the flowers were different sizes, because it would have been nice but in the end it didn't matter too much.

This was a culmination of what I had learnt and assimilated over the previous days. A added bonus was because I had been spending so much time on Pinterest I was able to recall the florals and leaf shapes that particularly appealed to me. There a nice balance here, and I can't actually believe I pulled it off considering it was all drawn 'freestyle' with the masking fluid.

The next stage for me will be to turn some of these into repeat patterns for my portfolio. 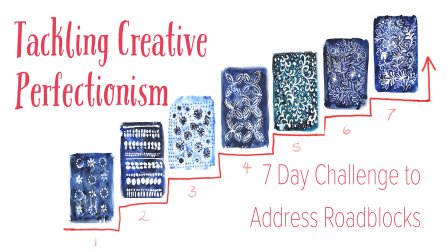