I was approached by somewhat of a creative hero of mine (henceforth known as Mr Hero Client) to do 5 illustrations for a series of articles he posts on his blog called 5 Things. The topic for this article was Portfolio.

He sent me the article along with some specs:

And I got to work highlighting and making notes:

I decided to theme all the images and worked with about 4 theme ideas. Finally, I landed on the Sexy Lady theme as sex sells and your portfolio (hopefully) sells you too. So I drew roughs of the first two illustrations and sent them off to Mr Hero Client:

Now, of course, I was planning on refining them and recreating them digitally, but this was the response from Mr Hero Client:

So, after doing a little victory dance, I replied and asked if I could also supply him with some animated GIFs and explained that even if he didn't use them for the article, he could use them for the social media posts. He was thrilled by the idea. I was excited to keep working:

Sidenote: This process also made me realise that I love working on the floor, crawling around on all fours from one drawing to the next and making a massive mess.

And so here we are at the final stills:

Which leads us to the animated GIFs:

Mr Hero Client has started sharing some of the GIFs on social media (OMG he totes called me amazing!):

Once the full article is released, I will update this project with the link.

Thanks for an awesome class :)

UPDATE: The article is heeeeeeeeeeeere: 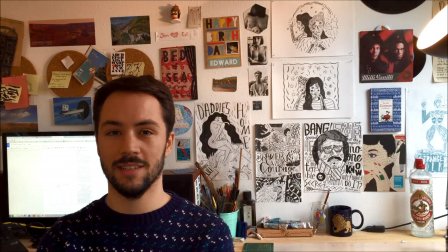