thank you for your course on the 4 core principles in design, it was very useful and enlightening.

As suggested, here is my subject for the project on the 4 core principles:

The three core items that distinguish the image of the David Suchet's poirot (hat, moustache, bowtie) not only are close together, along with the title of the TV Series, but are at a perfect distance to mimic the real distance they would have in real life, or at least where we would naturally expect them.

All elements are aligned to the centre, perfectly simmetrical. Also the "O" on the title are right were we would expect the eyes to be. Title letters have all the same height and spacing. Each element is perfectly horizontal. There seems to be equal spacing between the title and the two surrounding elements.

Only defect I'd point out is that the bowtie isn't perfectly simmetrical, or at least it doesn't seems so to my untrained eye. That details is a bit unpleasant.

The color on each item is the same: black. Stylization of each element seems to be along the same line, a 30's look with some art deco leaning(which would coincide with the setting of the stories, and the opening of the show).

Black on white. Sharp, minimal contrast to obtain a clean, classy and polished look, just like Suchet's Poirot himself. With such contrast items immediately catch your eye and your attention is fixed upon what's important and recognisable.

So, here it is, my 4 core principles project. I hope I've hit the mark with it, I've chosen a logo I know very well and it was fairly simple to understand, at least thanks to the new 4 principles I've learnt. I understand that it can be applied to anything from a logo to an advert, right?

Can't wait to learn some more. 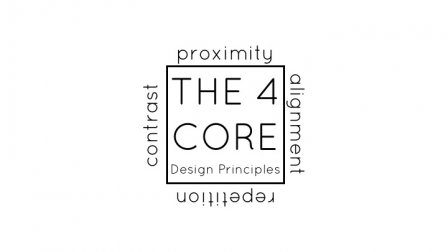