I took the Steampunk Gears I made in another of Helen's Adobe Illustrator for Lunch classes and made this extruded 3D image from them.

The original flat Adobe Illustrator file looked like this:

Here it is on a black background:

And here it is after extruding it in Illustrator. I was disappointed that the colors of the gear facess were not used for the extrusions.

I later discovered that the reason the extrusions weren't colored was because I used gradients instead of solid colors for the gear faces. Here is an updated version with the solid colored gears extruded.

I colorized the extrusions and textured the gears of my first version using Adobe Photoshop to get this final image:

This was an interesting class and I learned a couple of new techniques, specifically grouping objects before extruding makes the objects interact correctly in 3D space. Thanks!

P.S. I imported the gear outlines into Cinema 4D for 3D extrusion, texturing, lighting and animation. I really like the extruded shapes of the gears, especially when they are in motion. Now that the gears are animated, I think the relatively plain small green gear at the 3 o'clock position is one of the most fascinating because of its steady, paddlewheel like motion. 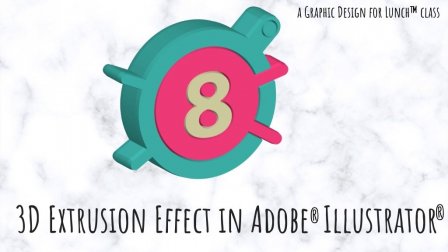