I didn't have your reference image to work from  and after spending a half hour searching online for a single round water drop on a blue background and coming up empty-handed, I gave up and just painted it based on your finished example.  Because I was practicing and needed to use up this notebook, I didn't use nice watercolor paper and instead used a page in my Visual Journal Mixed Media spiral notebook.  Also because it was practice, I used student grade Cotman rather than my Winsor Newton Professional watercolor.

p.s.  I like how you pointed out the fact that the light goes through the waterdroplet and out the other side.  Such a simple thing but it really helps to identify the source of the light.

p.p.s.  I think that when I downsized the image so that it would be 2 mb, I may have accidentally altered the dimensions of the picture so that the water drop looks slightly pinched instead of as rounded as it did in the non edited photo.  Ah well. 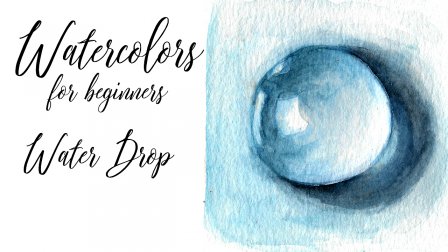