I've been a fan of your work for a couple of years and decided to finally dig deep into data viz methods.  Joined Skillshare just to see your tutorials and got turned onto the whole community.

Also spent a lot of time checking out Matthew Epler's projects and tutorials using Unfolding Maps and API queries.  Haven't been able to parse the XML or JSON with Processing, but did create a .csv file from the data using the method I learned from your tutorial.  Unfolding Maps is a whole other beast, but not able to output to PDF.  :(

As a site analysis for an architecture studio, I asked the Yelp API for 20 restaurants, and 20 retail locations based off of their proximity to a single coordinate in Portland, OR (Central Eastside).  Marker sizes are drawn from an algorithm based on number of reviews and overall rating.

Again, Unfolding Maps is a whole other beast, still trying to figure out code (nested for loop?) to parse XML or JSON as Yelp gives you option for both.  Also, aiming to draw tags for top 3 businesses in both categories.  Would be fun to run this for many different neighborhoods and cities. 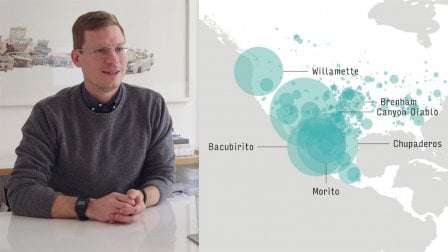