I've been dabbling with watercolours over the years, but not very seriously. Mostly if I got a good result it was a happy accident, so I want to understand how to handle the water and paint better.

I very lightly sketched out some shapes. After that I painted around the shapes, taking quite a bit of time to try and keep a steady hand with the brush. Once the outer area was filled in the inner shapes. As an experiment I loaded the paint into my calligraphy nib to see how fine a point I could get.

I have used the masking fluid Ana demonstrated previously, many years ago. I had to buy another one for this task. It was only after two attempts with the masking fluid that I realised I had the wrong product. I had no idea there was more than one type. The one I bought by mistake has a thinner consistency and is a bit paler (I thought they just changed the recipe!) but this one is described as "a water repellent liquid wax" and it is not designed to be rubbed off. Nonetheless, here is my failed experiment for this activity.

I used a couple of different whites for this one, a Sakura gelly roll pen and a bleed-proof white. As my paper had a bit of texture, it was difficult to get accurate lines as the surface was quite bumpy. I had to wait until the paint dried and then put a couple more layers on the leaves.

Well, this one was a bit fiddly, all that dabbing! I wasn't that thrilled with the result, I actually prefer the blue sky. What I came to realise through this process is that I prefer to have a less worked looked to the watercolour, so that it feels lighter. My clouds look so heavy it's a wonder they don't fall to the ground!

I had no idea what my final project would be about, so I spent a couple of days playing around with other more abstract paintings. In the end, I thought I have to do something, so I looked back through my sketchbook and picked something from there.

It doesn't have any masking fluid on it (I need to buy the correct type!) and it has just a few spots of white in the sky. I wanted to avoid another heavy cloud situation. I used negative space all round the drawing so that I could paint the sky first and then tackle the flowers and the little gal/guy.

I made this project purely for exploration. The flowers aren't the best, the colours aren't great either. I have learned a lot from doing all the activities and that has been totally worthwhile. Thanks Ana for a great class :D 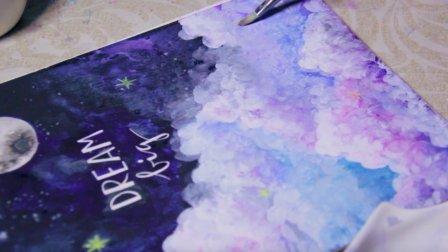