I watched the whole course a few weeks ago and starting working in my name. But finally past week I had to create postcard design and when I started drafting, many things of this course came to mind.
I did a few tiny sketches but I mostly worked in a single sheet of paper where I drew over and over..

The corrections with tracing paper are better than erasing and redrawing, but I wanted to work fast, that is why I did not worked that way.

Later I inked the work and add contrast to the letters. The firsts attempts did not came as I wanted so I decided to work the contrast after digitising.

This is the final piece:

I made a lot of corrections on the computer.
It was meant to be a postcard but I think it will be a great poster. 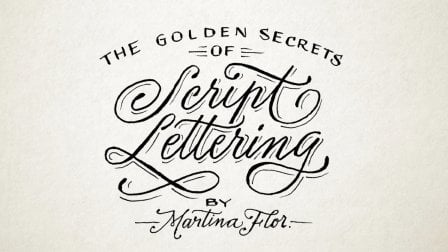 The Golden Secrets of Script Lettering: Find Inspiration In Your Handwriting
Martina Flor