So my problem is space

OK, first: thanks for putting up a class with a list! Being prepared is really important, nowadays, of even only for a period of quarantine. (In December everyone around us was quarantined simultaneously, so we were really grateful for our food stores!)

My spouse is with the military (as a researcher, but still) and they keep telling us to stock up, but don't deliver particulars.

The prepping videos on YouTube (and the info put out by Eurpean governments), usually presuppose that you:

a) have a five story single family home with a chicken farm and five acres of good farm land. Oh, and a pick up truck. One for each family member. ;) And a well.

d) you don't have pets, but several animals (cows, horses, pigs). Oh, and a guard dog. Who all don't require food. o_ô

OK, that's a bit of an overstatement, but that's what these videos make me feel like. Your approach was much more down to earth.

... so, my main issue is that we live in a small apartment in the city. I guess we're doomed. -_- Still trying my best. Here's some pantry shelf:

It's a bit of everything. In general, we've good lots of noodles and rice. Also sauces, bread spreads and dressings. There's even some vanilla sauce ... Need to stock up on tomatoes and beans, I'd say. Maybe some bread that'll keep for a long time would be good.

This week, we've had some coupons for the drugstore, so we've stocked up on toothpaste and the like. Also recently ordered some flashlights and batteries - not even because I live in fear of a total black out, but cuz recently we've had a smoked through cable. In the middle of the (winter!) night. So all I could do was cut the power and make do with battery powered lights!

Oh, and I've got artist materials, board games, and hoards of picture books.

One problem is fruit and veg. Now, for "prepping" you should usually buy stuff that you would eat normally, no? But, normally I'd never ever eat canned fruit and veg. So, if nothing bad happens that stuff is just going to spoil. -_- Of anybody's got any idea what to do about that, I'd bea happy camper.

Same with space. That's just my main issue. Like, half of our stuff is just lying/standing around the apartment.

Another issue I thought about is what's going to happen, if the electricity is cut?

I stock oats, muesli and plant milk, which won't spoil as easily (especially without refrigeration) for that case, but still. :/

Canned nuts are a great idea! I'll do that.

And I love the auto kit tips! We also have little emergency kits on our bikes. I mean, not in preparation for WW3, you know, but the little things. Actually, just last week I needed that to quickly patch up LO on a bike trip. :) 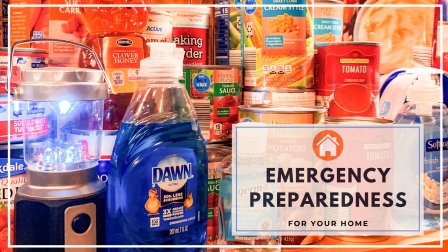