This is a card that I had painted for Father's Day last year. Before I sent it I had scanned it in case I ever wanted to reuse it. I thought it fitted with this mockup since it has the paint brush at the bottom.

I found these watercolour feathers in with some of my old paintings. I thought the colours would look nice on the tote.

Originally for the mug I painted a galaxy design within a circle with a white "K" over top. I guess it was good I tried a mockup because I discovered that design does not really suit a mug (or maybe I didn't do the best job of distorting it). Anyways, I decided to use the galaxy pattern to mask out a typed "K". I think it looks a bit better like this.

The quote is one I brush lettered from Dumbledore. It does not exactly fit in with the nib pen in the mockup but I wanted to practice my brush lettering anyways.

THANKS Teela for the awesome class. I learned a lot! 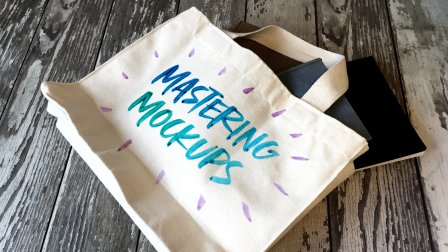