Insect Rivals of the Rainbow

I decided insects might make for an interesting subject, so I did some searching on Flickr and found an image titled "Insect Rivals of the Rainbow", which is in fact a photograph of some real-life specimens, as opposed to a line-illustration.

I decided to use specimens 2, 3, and 4 for a bit of variation, and cut them out using a combination of the Quick Selection Tool and the Polygonal Lasso Tool to add/remove selections for the finer-details.

The source photo was slightly blurry even though the scan was high-resolution, however the end result was acceptable. I kept them colour at this stage, although I did end up using a Hue/Saturation layer to desaturate them while I was creating the design.

I didn't play around with the Gradient Map too much, and just stuck with some bold, saturated colours that complemented each other but also provided a nice amount of contrast. Finally, I added a little noise to give the final print a slightly photographic look.

Thanks guys for a fantastic tutorial, and I look forward to experimenting further with creating different kinds of patterns using these techniques. 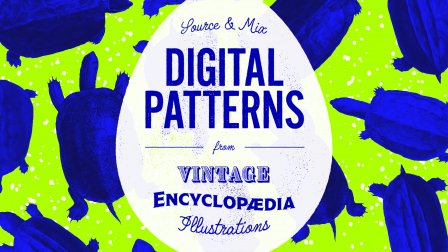