I'm in love with the macaron. I have always wanted to make them myself and I found your blog post. And I followed every step, with mistakes.....

First off, I have a scale that only uses ounces and not grams. frustrating. But I converted with a calculator and got as close as possible. Secondly, I didn't have almond flour and I substituted Hazelnut flour instead. Am I crazy or what? I used my Vitamin to blend the sugar and nut flour and it made hazelnut butter. Too hot and too fast. So I switched to the food processor. Much improved. I did not age my egg whites, I did try the microwave trick from the blog. And, to my astonishment, these actually came out looking like macaron. I did try to use a template, but my batter was quite runny and I felt rushed. so not perfect circles. I filled them with chocolate buttercream and they disappeared almost instantly. No one was going to wait for them to sit in the fridge. Other notes: I used parchment paper and commercial weight pans.

I have a second attempt without photos unfortunately. I used another persons recipe. I used aged eggs. I used Almond Flour. :) And the recipe called for equal parts almond flour to icing sugar 65 grams of each. I whipped the meringue for 8 minutes or so. The batter was perfect and piped perfectly. I used a silpat macaron template.  I also used my regular cookie sheet, but these are high quality just not commercial quality.  I let them rest for 30 minutes. They came out completely flat. Completely. Not to be defeated, I tried again. The recipe called for cream of tartar or salt. I used one or the other. I wonder if that is the problem.

My third attempt: Back to the your recipe that worked before.  I used Almond Flour this time as well since it's my 2nd try in a few hours. And the eggs were obviously not going to be room temp because I had used those in the previous batch, so back to the microwave trick. 15 seconds is about right for me. Whipped up the egg whites just fine. Not quite 8 minutes. And I sifted and used my food processor for the blending of the almond flour and sugar. Came out so smooth. I folded the batter together. I think it came together well. I filled it with American Buttercream. So perfectly delicious. This recipe made so many macaron.

I used I used a silpat macaron template again. I also used non commercial pans. Both mistakes. For one thing, the silpat curled on me. I've not had that happen before, but it did.  I definitely prefer the parchment paper and commercial pans.

Here is my result. 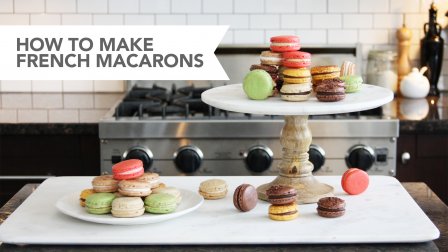