Here is the first exercise. Had some trouble with the more intricate ones like C. Went in and manually moved the points around to get the desired curve which helped me to realise where the anchor should have been to get the final result. My ability to figure out where to put the points and how much space I had to allow to curve on some edges also improved.

My illustration which I scanned to use in Illustrator. Tried to figure out a way to incorporate the techniques show within the class. Will explain in more depth when the illustration is formed digitally.

Final image is a lot different to the sketch but I had trouble planning out what I wanted it to look like in my head so I tried to simplify it a little.

1. Used the pie dissection to create a segregated basketball.

2. Used the corner radius tool to round the edges on basketball corners.

3. Used the last technique (the one we practised above) to create the little worms coming out of the basketball.

Added grain effect and gradients to give the illustration some more texture as well. Learnt from another of Hayden's classes. Also for the "smoke" or "clouds" I used the line tool and the radius tool to get them curved, then I used the Play-Doh technique (Warp Tool Shift+R) and pushed around the shapes after I expanded them to make them a little more organic.

Update: Thought I would add an update as I made a cool little illustration out of this by accident. Below is a bunch of floating gems/jubes (lollies). Made from the basketball segment that had been cut out and adding some more gradients and highlights to make them more 3D. 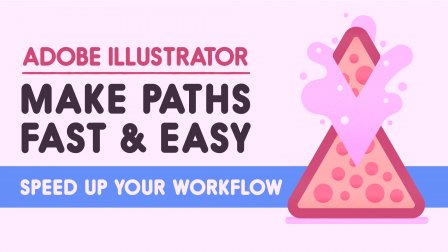