I'll be posting recent images here to share my thought process when I shoot and edit.

The images below are from a recent shoot with a young musical artist (www.nikmoody.com).  For my portrait shoots, I have full control over the where the subject is positioned, at least more so than my street photography does.  This allows me to create compositions instead of just finding them on the street. 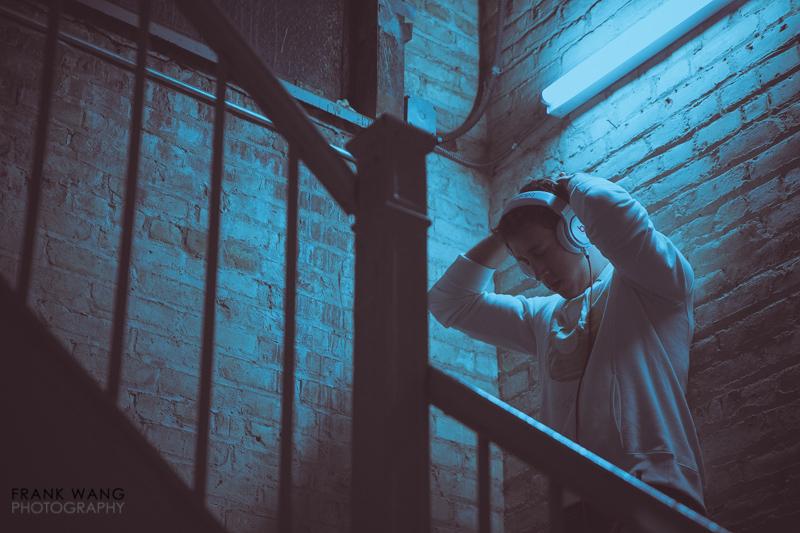 For the above shot, I placed Nik on the stairway landing so I could shoot "through" the railing and frame Nik.  I also liked the strong diagonal line created by the handrail as well as the vertical lines of the bars.  Also incorporated into the above scene is the use of thirds to position the focal point (Nik's head) near the upper right hand quadrant.  This photo was not cropped but normally I'd crop to remove distracting elements or to change the proportions of the photo.

What would I have done differently?  The tanget / merge created by Nik's right (camera left) elbow and the post on the railing bugs me a bit. I'd have shifted slightly over to give the elbow a bit of breathing room. 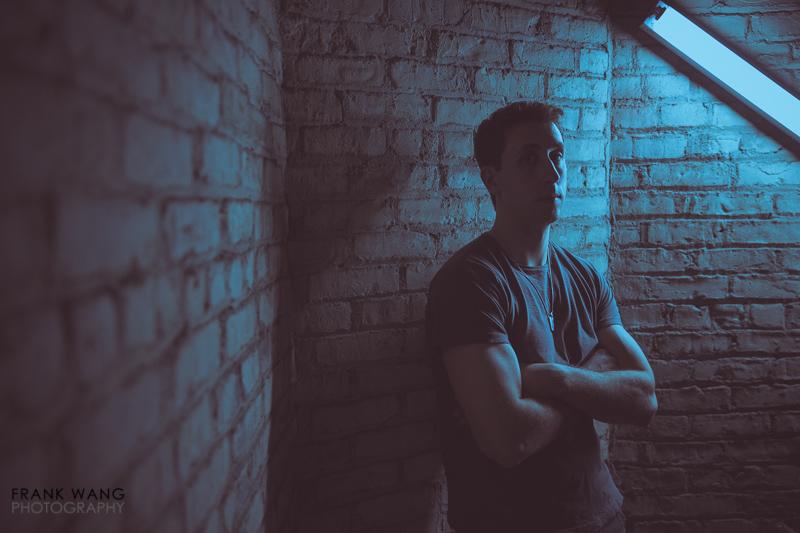 This second image utilizes what I consider to be a cheap trick and I highly suggest you take advantage of it.  Aside from utilizing thirds to divide the image (the wall segments almost nicely divide into thirds) or to position Nik's head, I used a bit of foreground on the left to create a sense of depth and draw the viewer into the image.  What's the cheap trick you ask? It's the wall.  Sometimes it isn't easy to find a composition that works or find elements like diagonals or frames to incorporate.  But there's almost a wall nearby.  So when I'm out of ideas, I cozy up to the wall, let it fill a third or two thirds of my frame, position my subject to the opposite side, and click.  So easy it seems cheap.  Is it going to make a fantastically original or creative image? No, but it may bring the picture from "meh" to "not bad".  So why not?

Summer 2013: The following images are from a recent trip to Turkey. 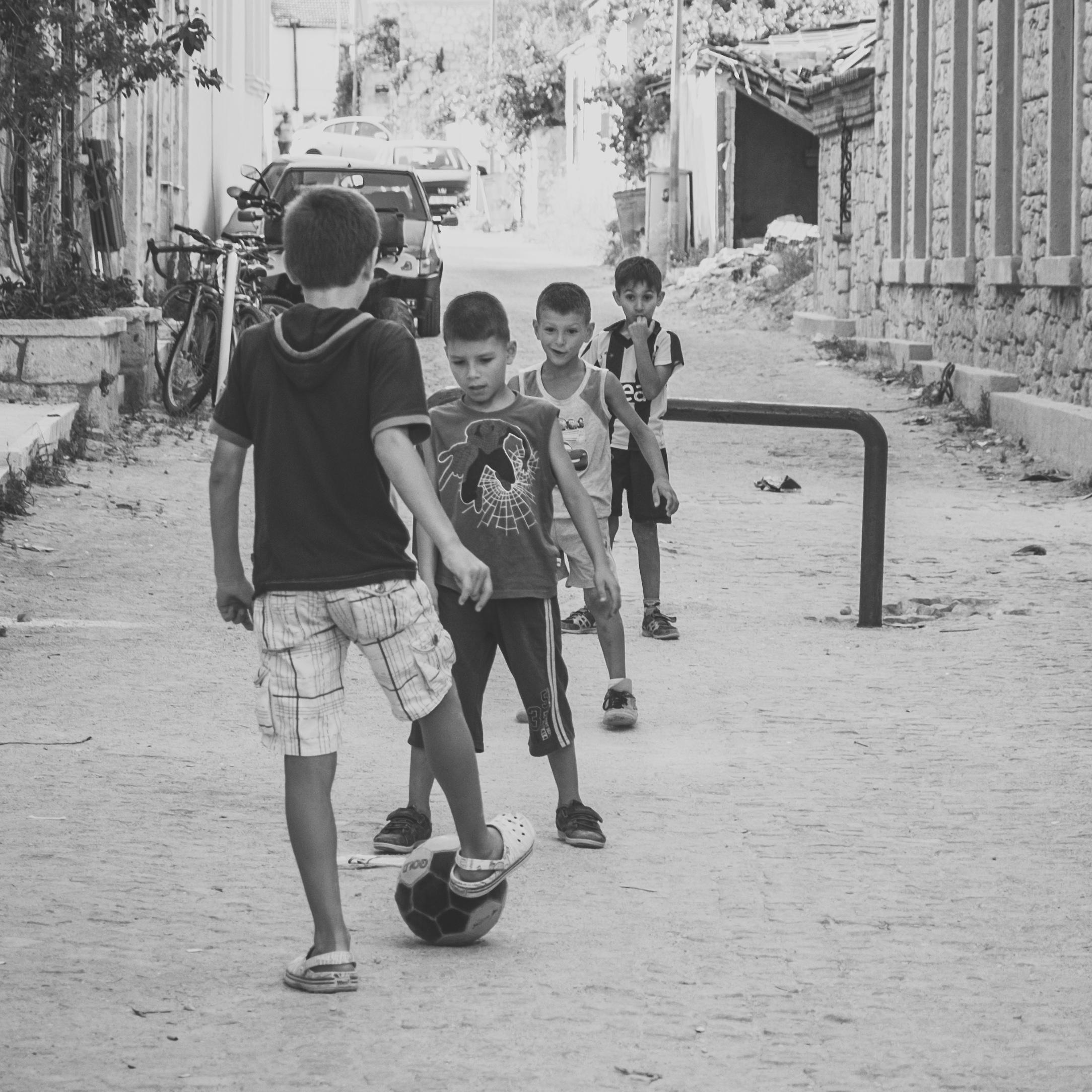 When I saw this scene I really liked how all the boys were standing in a neat diagonal line.  I managed (by luck only) to capture the smile on the boy the 3rd from the left.  The diagonal line functions as both foreground (the two boys on the left) as well as a leading line, which is essentially a form of foreground.  I also liked that the background was a bit brighter behind my subject, allowing me to isloate him even more.  The original shot was actually horizontal, but the left and right sides of the image didn't add much so the square crop helped focus on the subject and also emphasized the diagonal line. 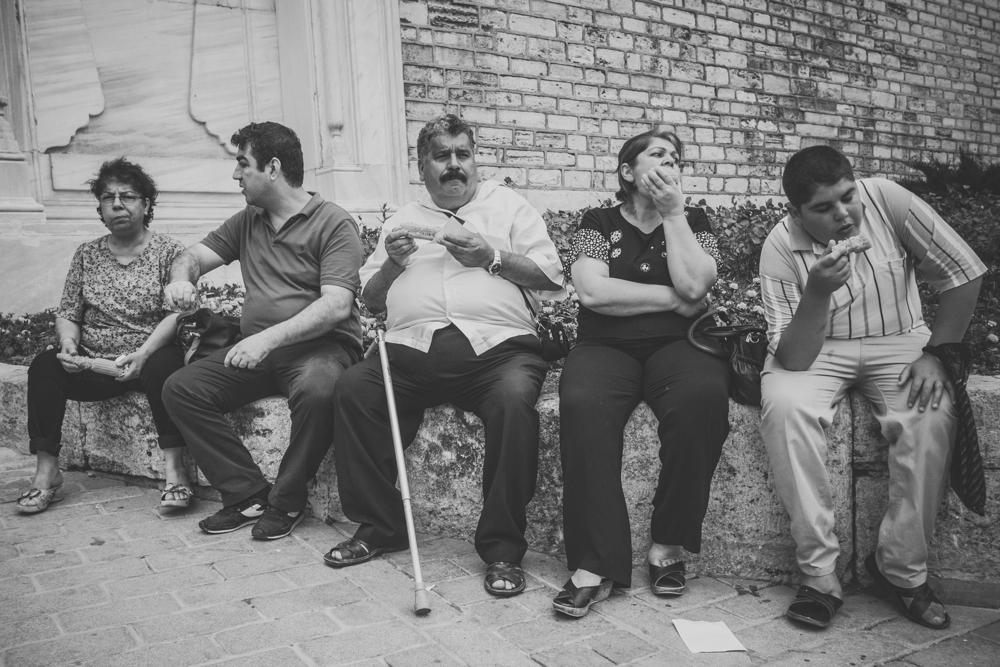 What caught my eye about this scene was the five people all lined up in a row, each lost in their own thoughts.  I particularly like this one for the various expressions but also for the fact that their heads are lined up in a nice horizontal row.  The guy in the middle also has a bright shirt, helping him stand out a bit.  My eye starts with him and then notices the expressions of the people sitting to his left and right.  There's a bit of vertical and horizontal symmetry to this image that I like quite a bit.  While the depth of field isn't all that shallow, there's still some distinction between the heads and the wall behind them, and the dark pants (mostly) separately nicely from the ground in front.  This gives me a relatively distinct, foreground / midground / background.

Yes? Can I help you? 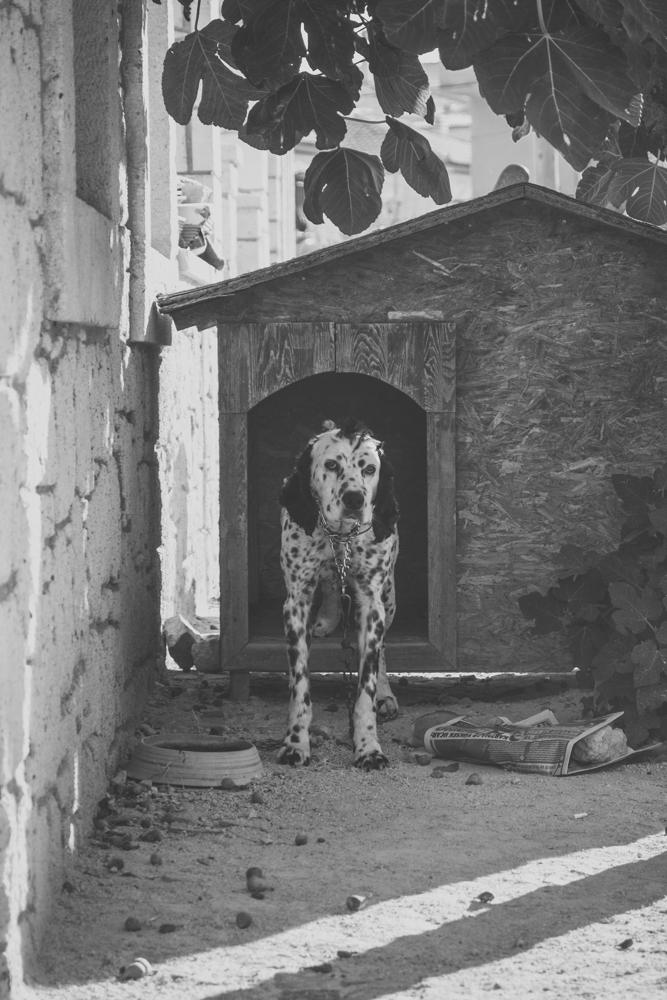 I'm including this one because it breaks all the rules about not placing your subject dead center in the middle of the frame, yet somehow it works for me.  I like that the leaves on top, the wall to the left, and the ground on the bottom all create a bit of a foreground framing the dog.  I also like that the mostly white dog contrasts nicely with the dark doorway of his little house, so that he is framed again from the back.  As I've mentioned in the lectures, doorways make for great frames! 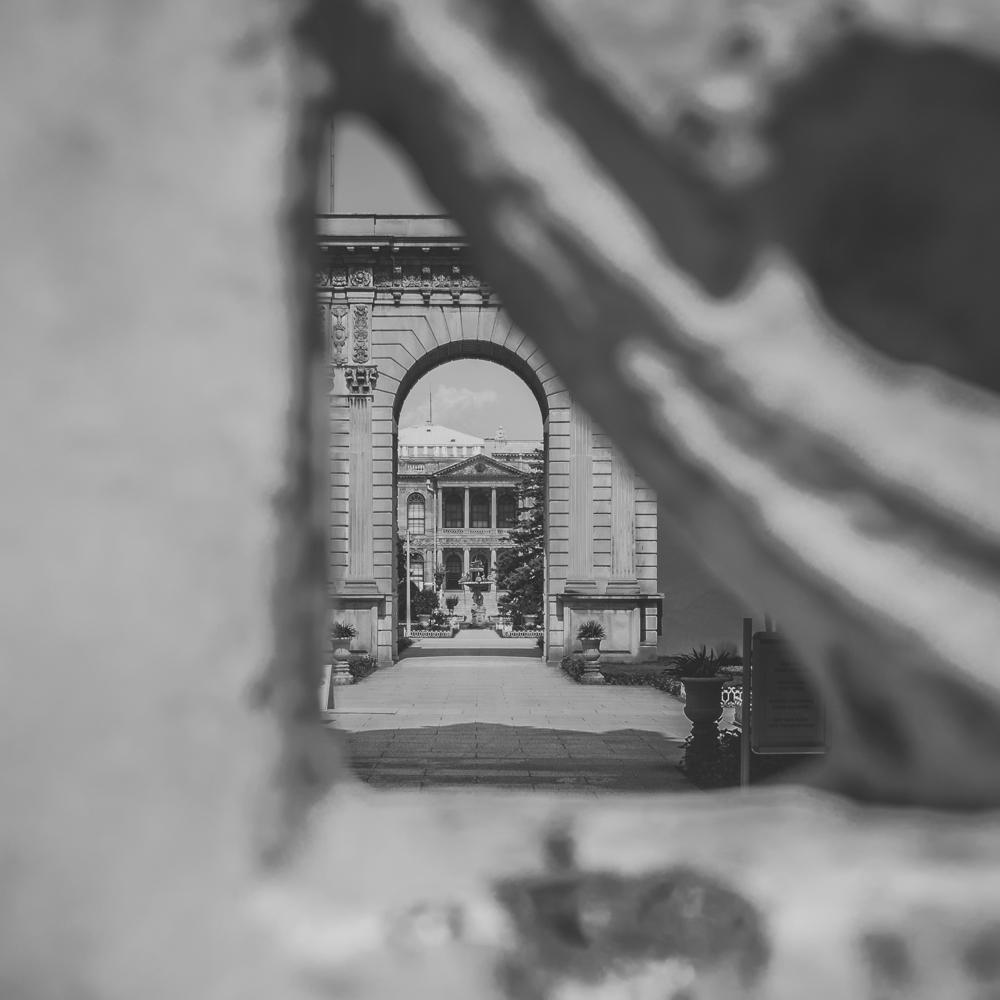 I'm including this one because it's a clear example of utilzing foreground and framing in composition.  In this case I walked up close to an iron gate, stuck my camera up close, and focused on the background.  It just happened that there was an existing archway framing the buliding behind it, so I got a double dose of frames.  Holes in walls and fences make for great frames, just make sure there's a subject behind it!  In fact, every time I see some sort of hole in a wall, I walk up to it to see if there's a shot. 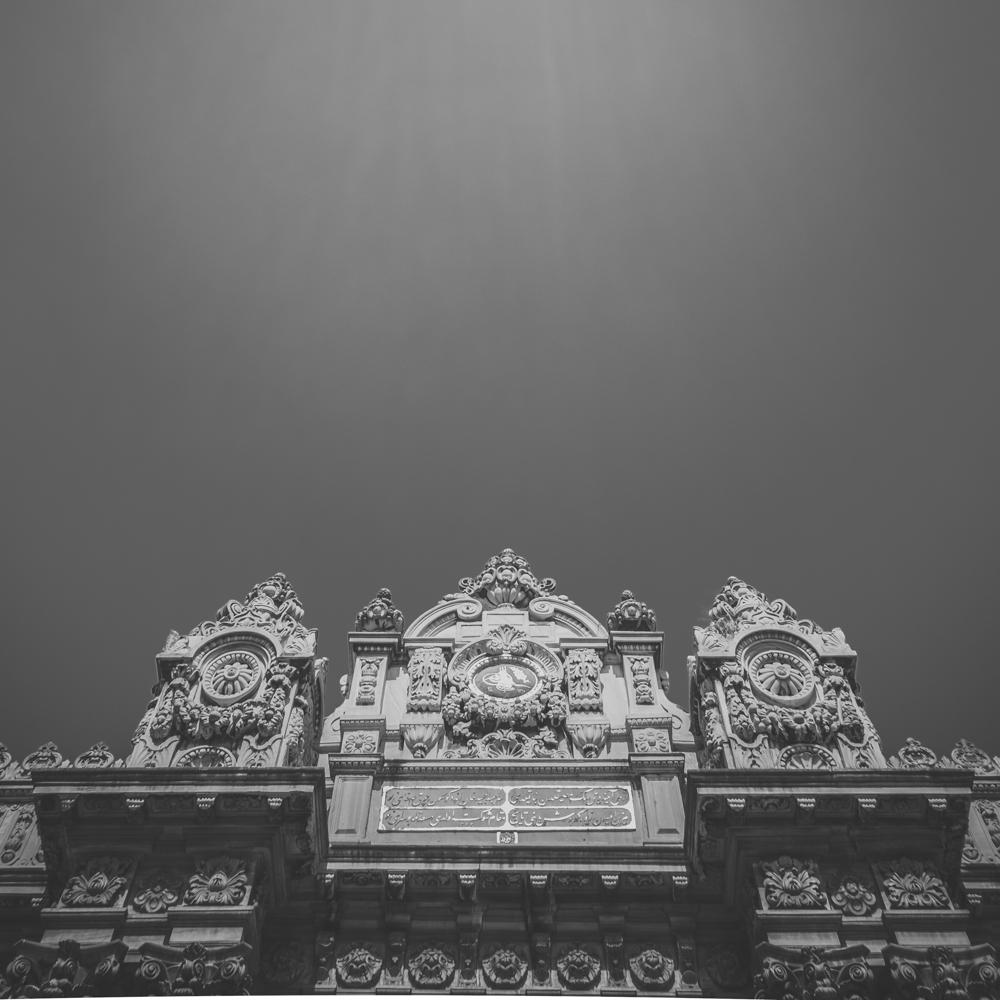 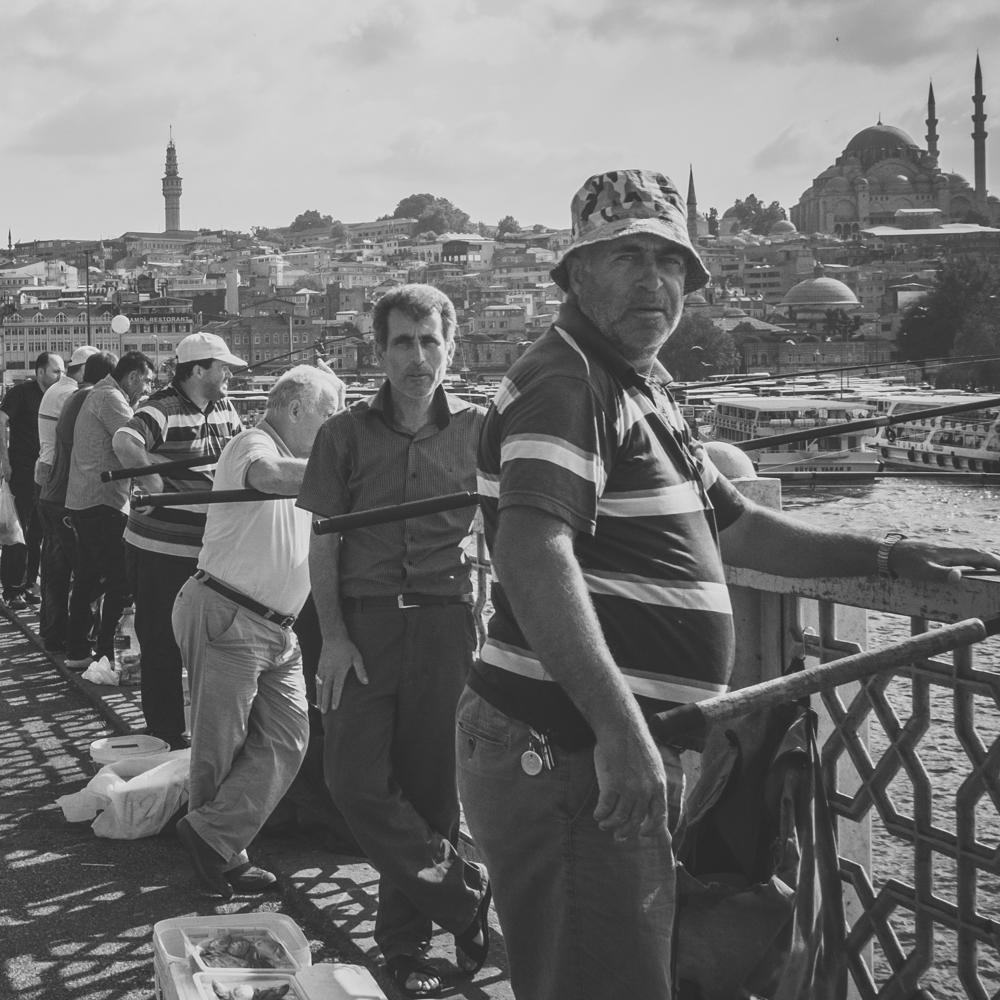 For this photo I shot fairly wide knowing only that I wanted to capture the line of fishermen.  Afterwards, I cropped heavily so that the line of their heads was roughly where the top third is and placed the closest fisherman around the right vertical third.  Composition-wise I was actually aiming at the 2nd guy from the right, so that the closest guy would simply be foreground.  However, the first guy turned his head at the last minute so I ended up catching him too. I've included the original crop below for comparison. 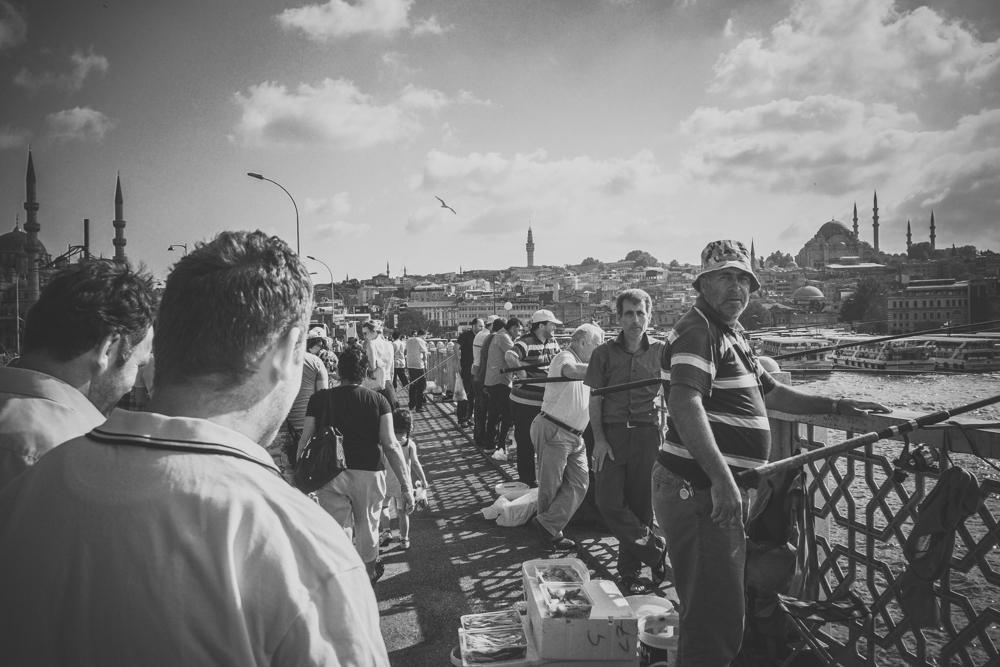 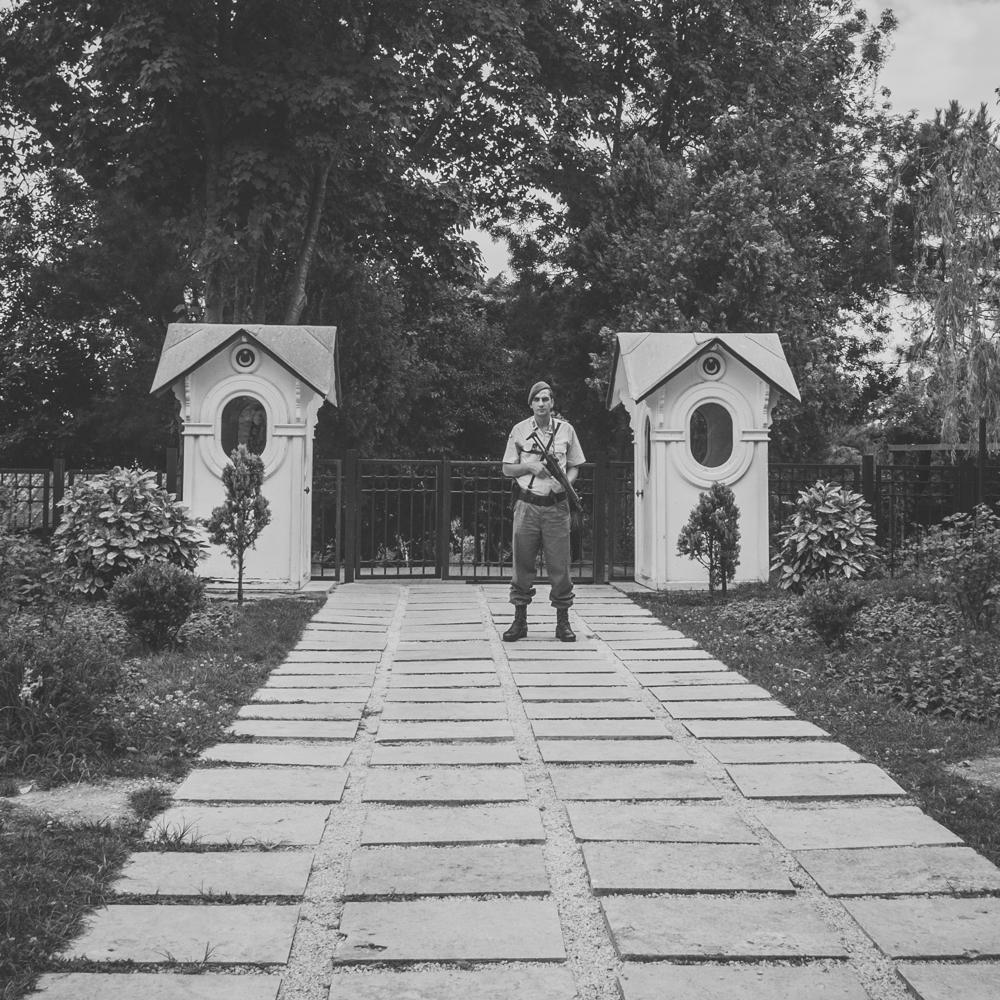 This scene immediately caught my eye because of the solitary guard standing on all those beautiful leading lines in the foreground, nicely framed by the two white posts in the background.  His light-colored uniform also contrasted nicely against the dark fence behind him. 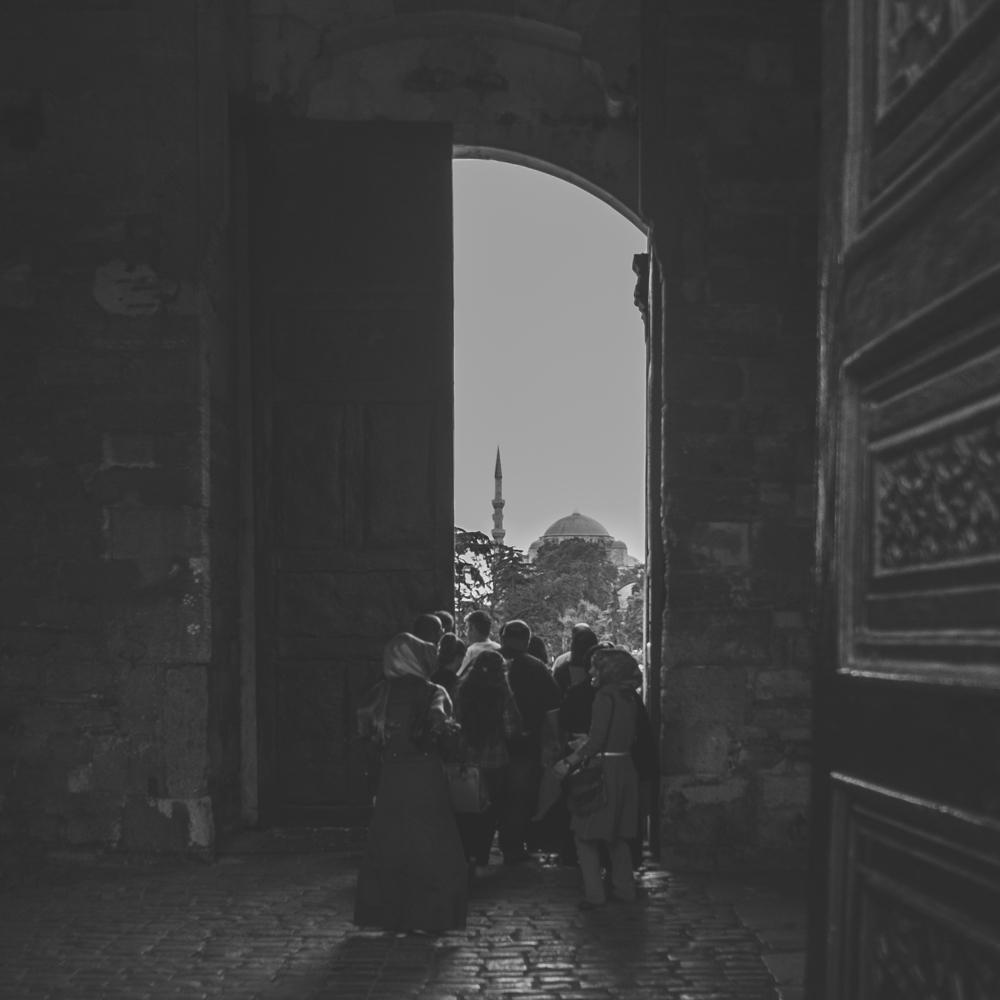 This scene immediately caught my eye because of the contrast between the dark foreground and the brighter background through the doorway.  Again using the concept of frames within a frame, the dark foreground allows me to frame mosque peeking through the trees far in the distance.  I also like that crowd of people in the foreground almost look like they're headed to the mosque to pray, though in reality they're just exiting the building we're in.  It's become so compulsive for me to take a picture whenever I see doorways and windows that it almost feels like a cheap trick.  But hey, I'll take what I can get!