This class/project has been a blast - thank you very much for your guidance and comments, Frank!!

Well, I wish I'd watched your lecture before I went away last weekend! WR and I escaped for a long anniversary weekend into the hills aorund Melbourne and spent a lot of time around tons of plants and animals. I cropped a lot and hopefully achieved some of the objectives at least partially and I already posted a few silhouttes earlier... 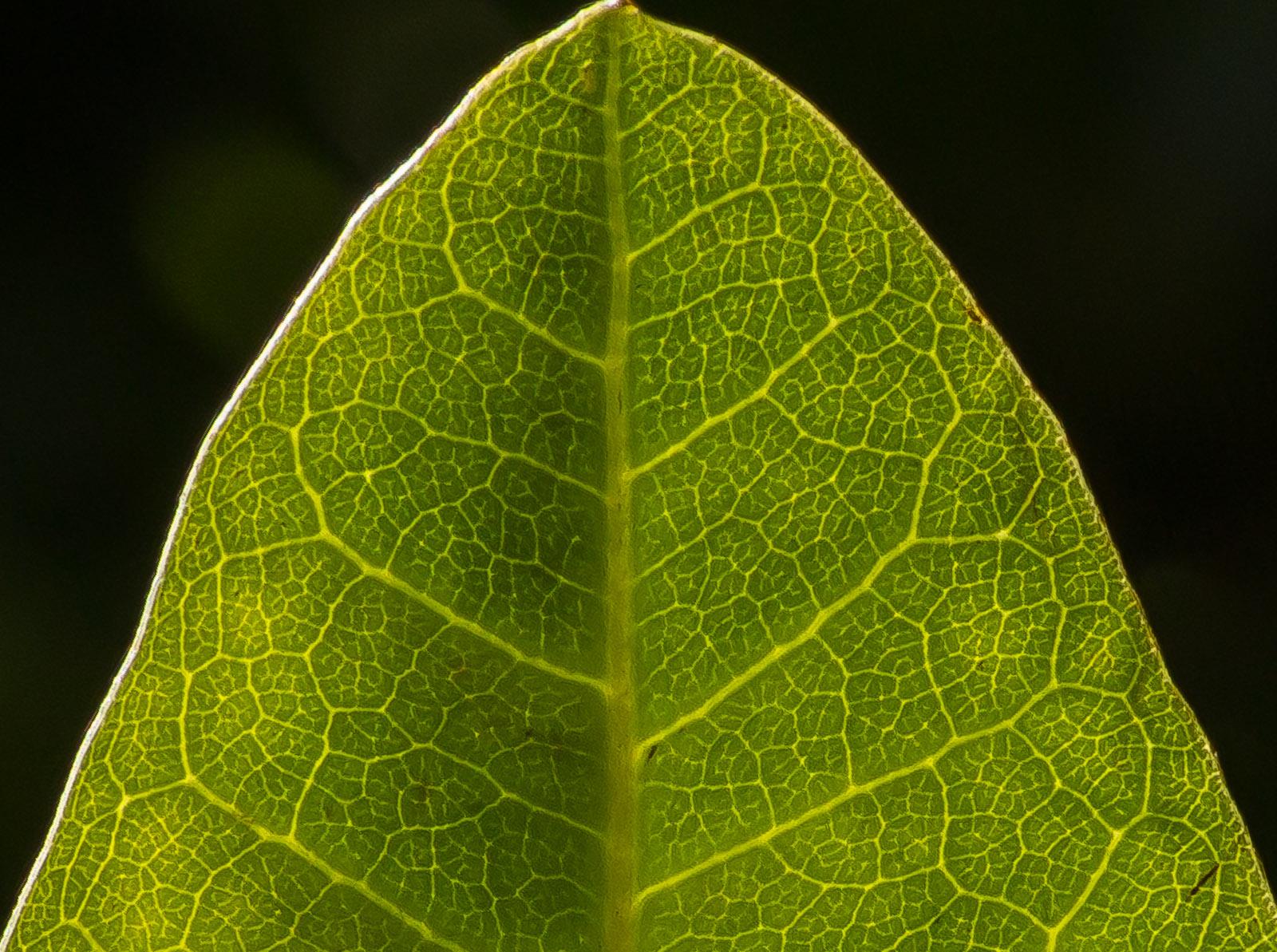 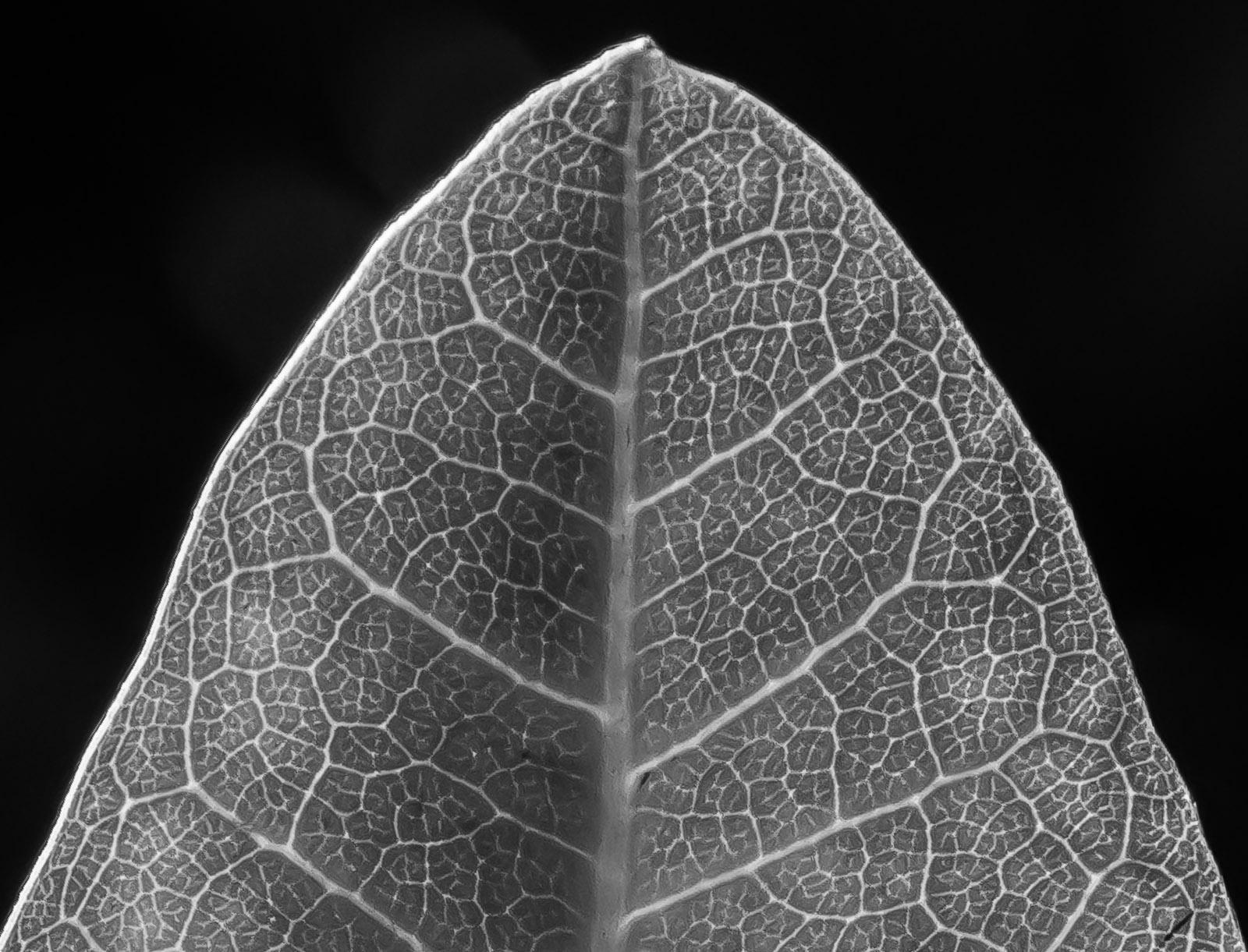 I guess this image achieves a few of the concepts Frank introduced: It's fairly symmetrical, there is a strong contrast between the subject (a backlit rhododendron leaf tip) and the background. It's fairly abstract due to the macro and in a sense it's a reverse silhouette..kind of. Alright, the silhouette is a stretch but hey...there are also triangles at work here!

Which do you like better? I'm leaning towards the B&W - it looks more like something out of a raster microscope.. 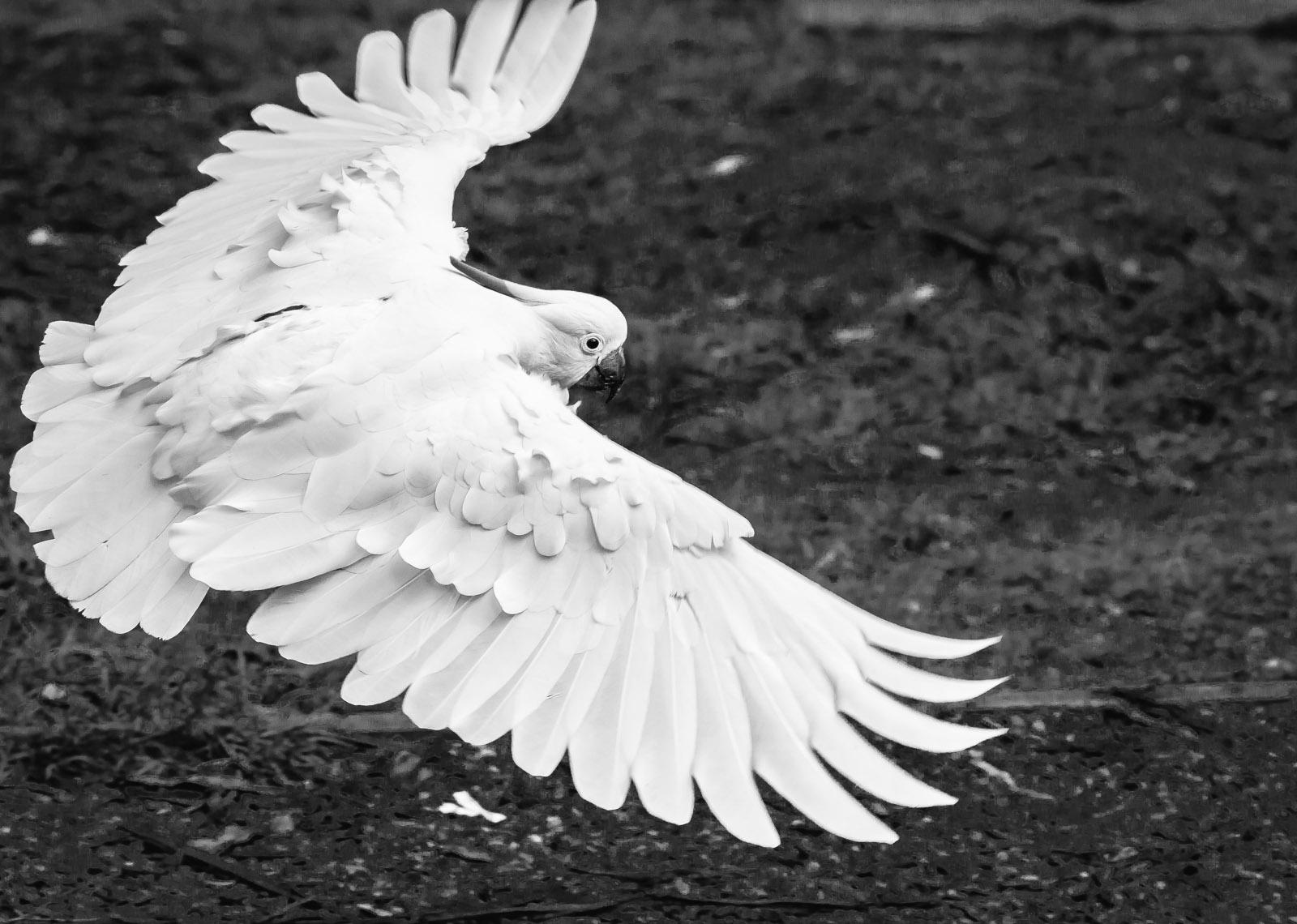 One of the national parks we visited was full of thse gorgeous white cockatoos - I caught this one as it was about to land. I managed to push the post-processing to make the ground look quite dark which creates a nice contrast between the subject and the background. There's some cool detail in the feathers - check out the larger version in the Dropbox link here. I'll clone out some of the distracting rubbish in PS later. 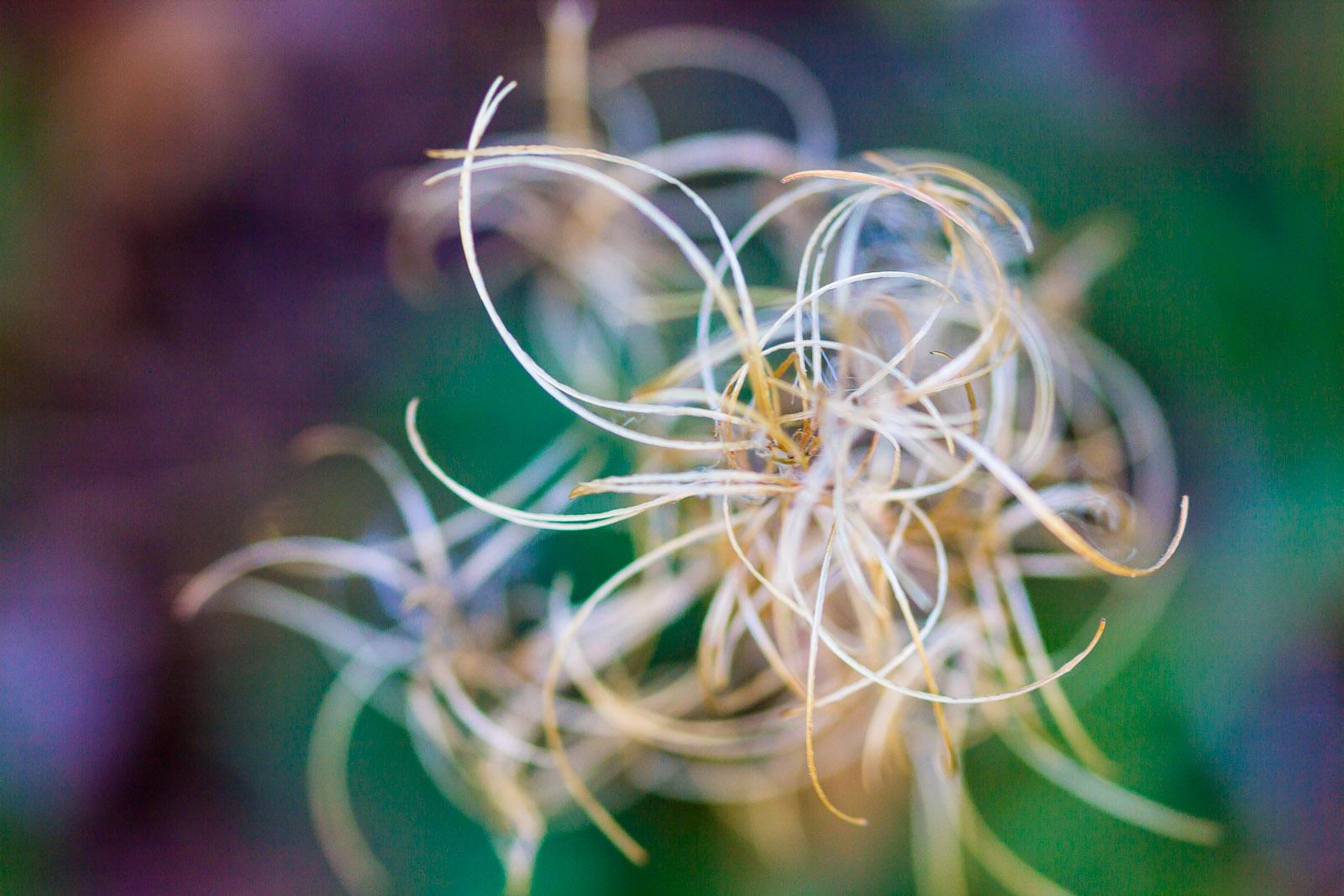 An abstract shot of a flower that has seen better days - it's just the husks left now. I liked the way that the background colours play with the whisps of the flower. 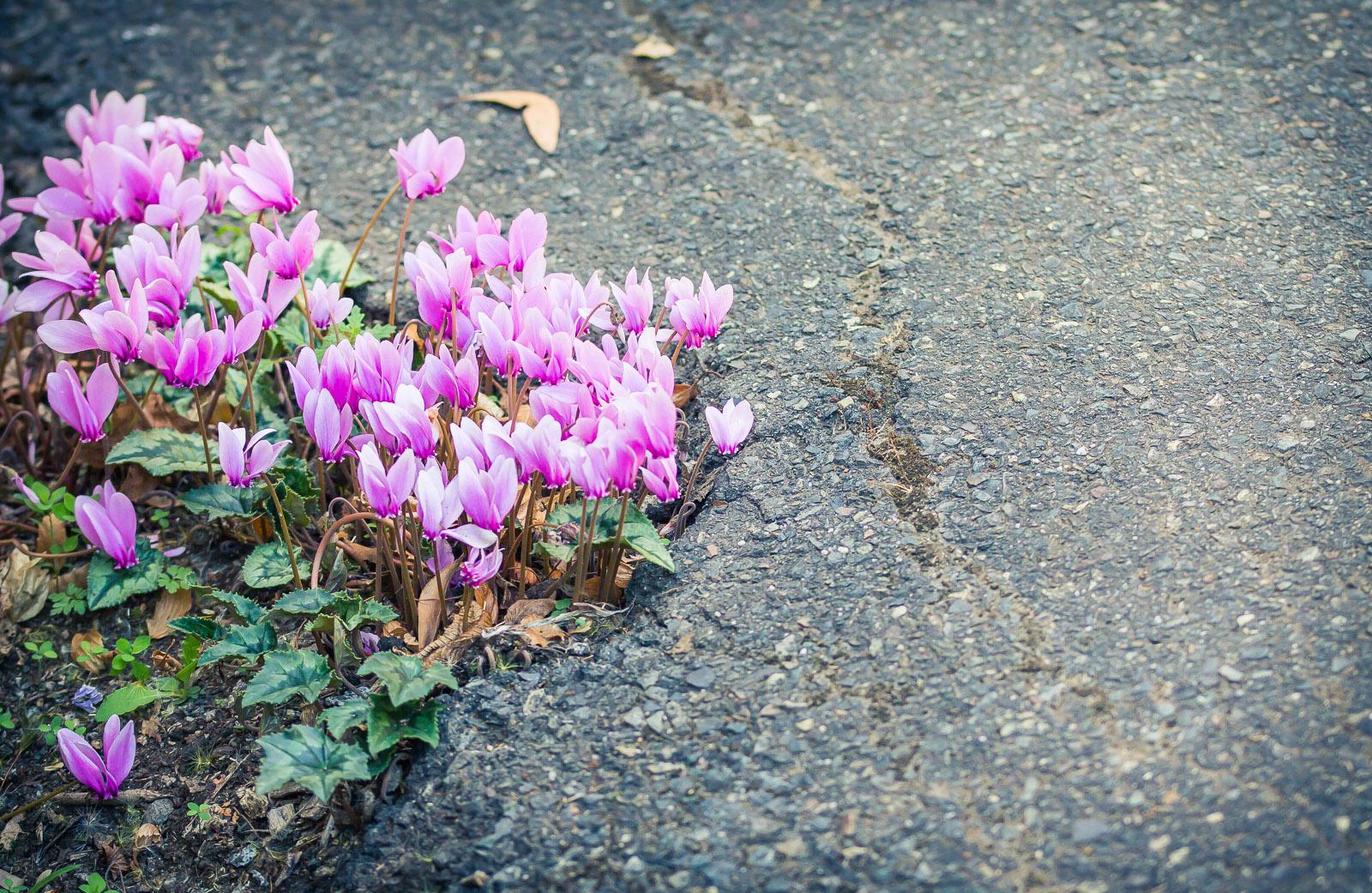 I liked the contrast here between the barren bitumen and the flowers slowly encroaching the breaking structure. The flowers form a triangular tooth that's sinking into the road. It looks a bit like a demonstration or concert - kids wanting to cause some trouble!

I don't know what those flowers are called - if anyone knows, please let me know in the comments! Slight split-tone and vignette applied here. 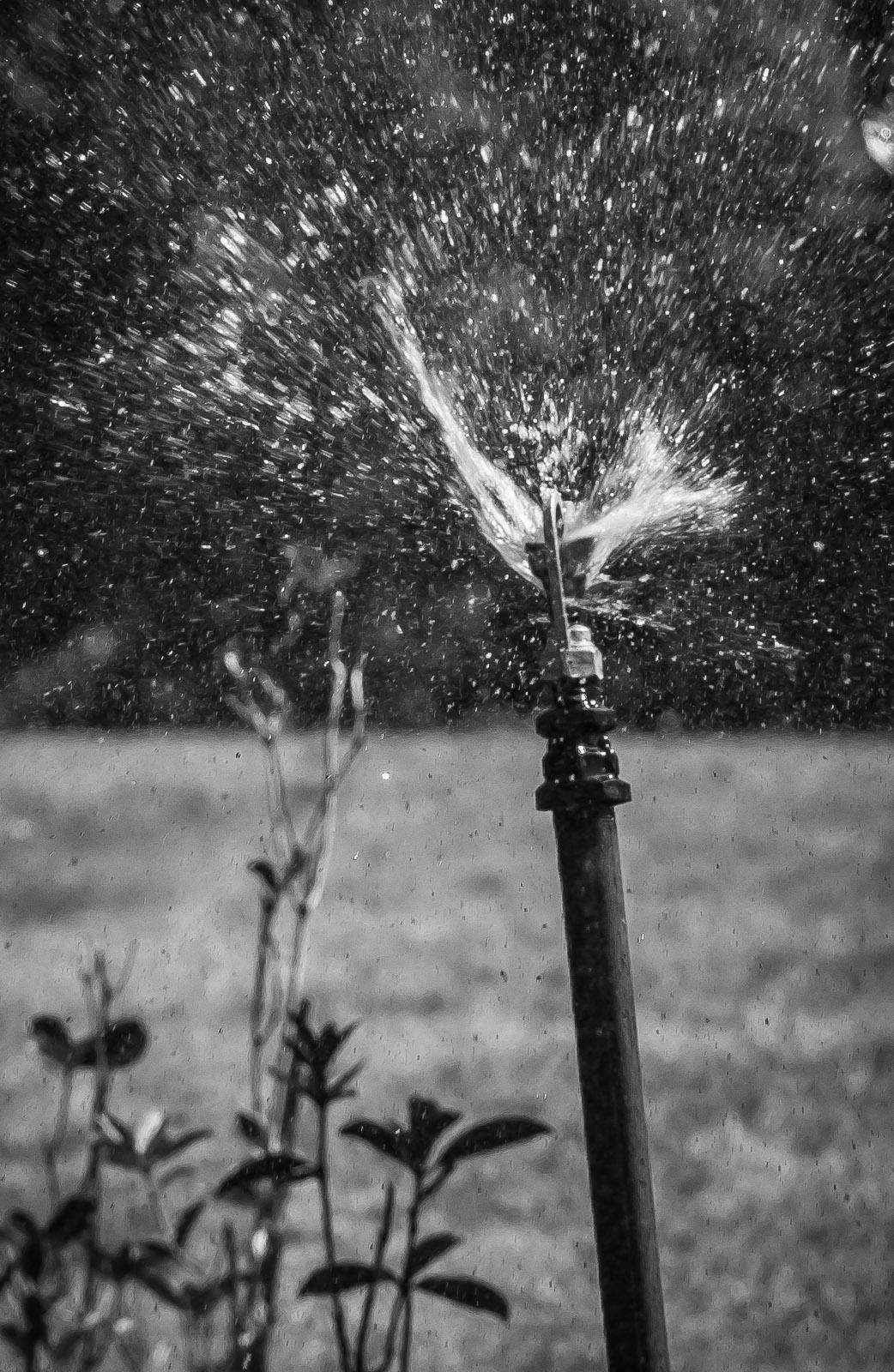 To cool off those rebellious flowers above. I like the contrast created between the dynamic water and the dark static background. The water droplets appear dark on the lighter background below as well, which I thought was kind of neat.

There are more photos in my Dropbox that didn't make it onto the project page. Check them out here.

For this assignment, got out my Christmas/Bday present, the Tokina 11-16/2.8 - a fantastic UWA (ultra-wide angle) lens which is able to see more diagonals than most. I'm still learning to use this lens and I'm getting better. Also, it's been unbearably hot all week here in Melbourne. It's now 11:30pm and still 85 degrees..was high nineties almost all day long. Needless to say, it's been hard to get out and walk around with a heavy camera kit, so I'm not sure if the quality of these photos will match the ones I've posted so far.

HOOD PUSS GETS AWAY  // remember to pay your models 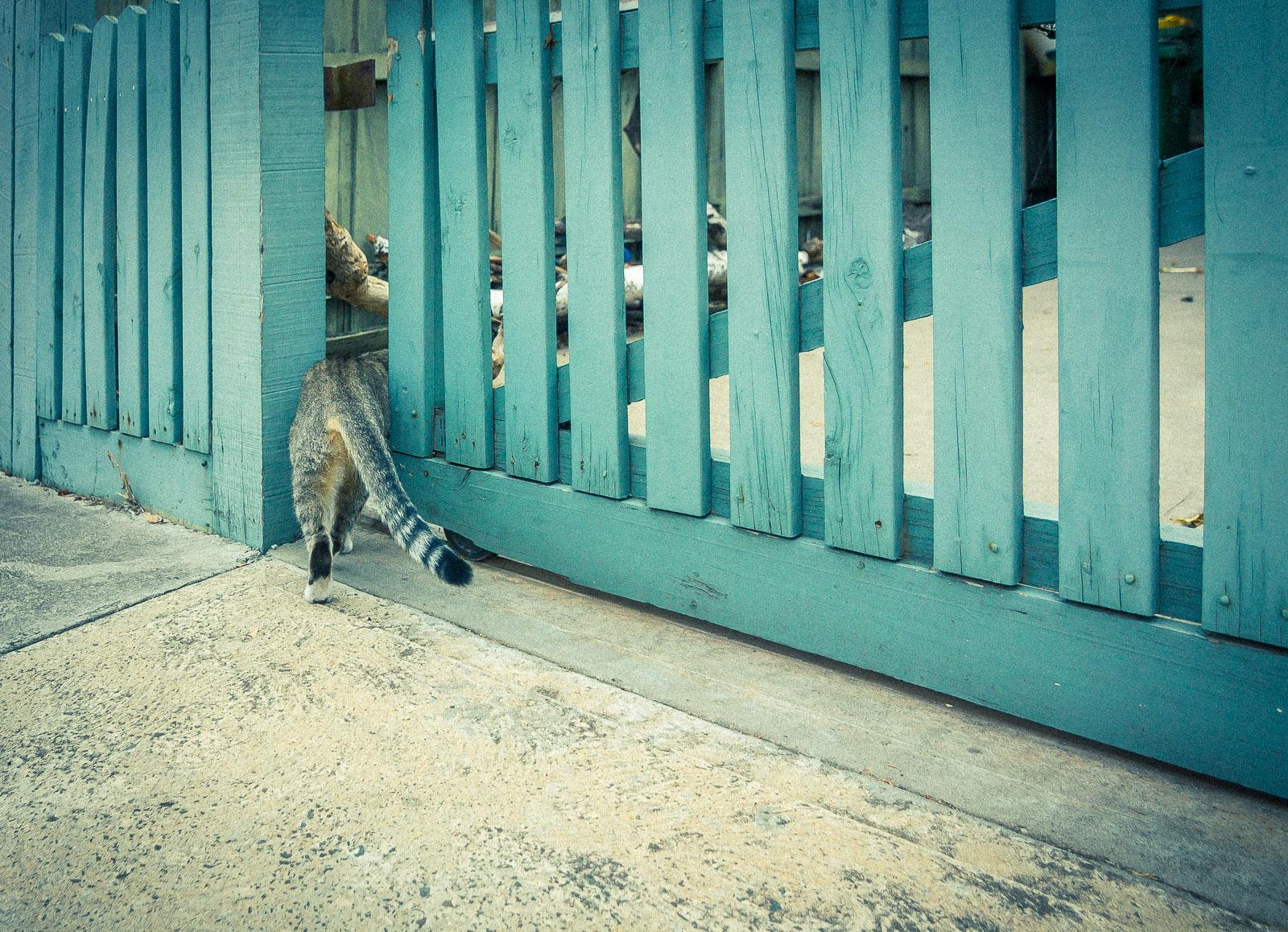 I tried to get another shot of the ratty neighbourhood cat, but since I didn't bring treats or a model release form, it decided it was time to dash. This was all I got. Got some cool lines out of it, though. I showed to my roomie Evan and he said something along the lines of 'Nice photo, but really, all you got there is a picture of cat's ass'. I think of Evan as my drill sergeant.

Here's the original, raw, straight out of the camera: 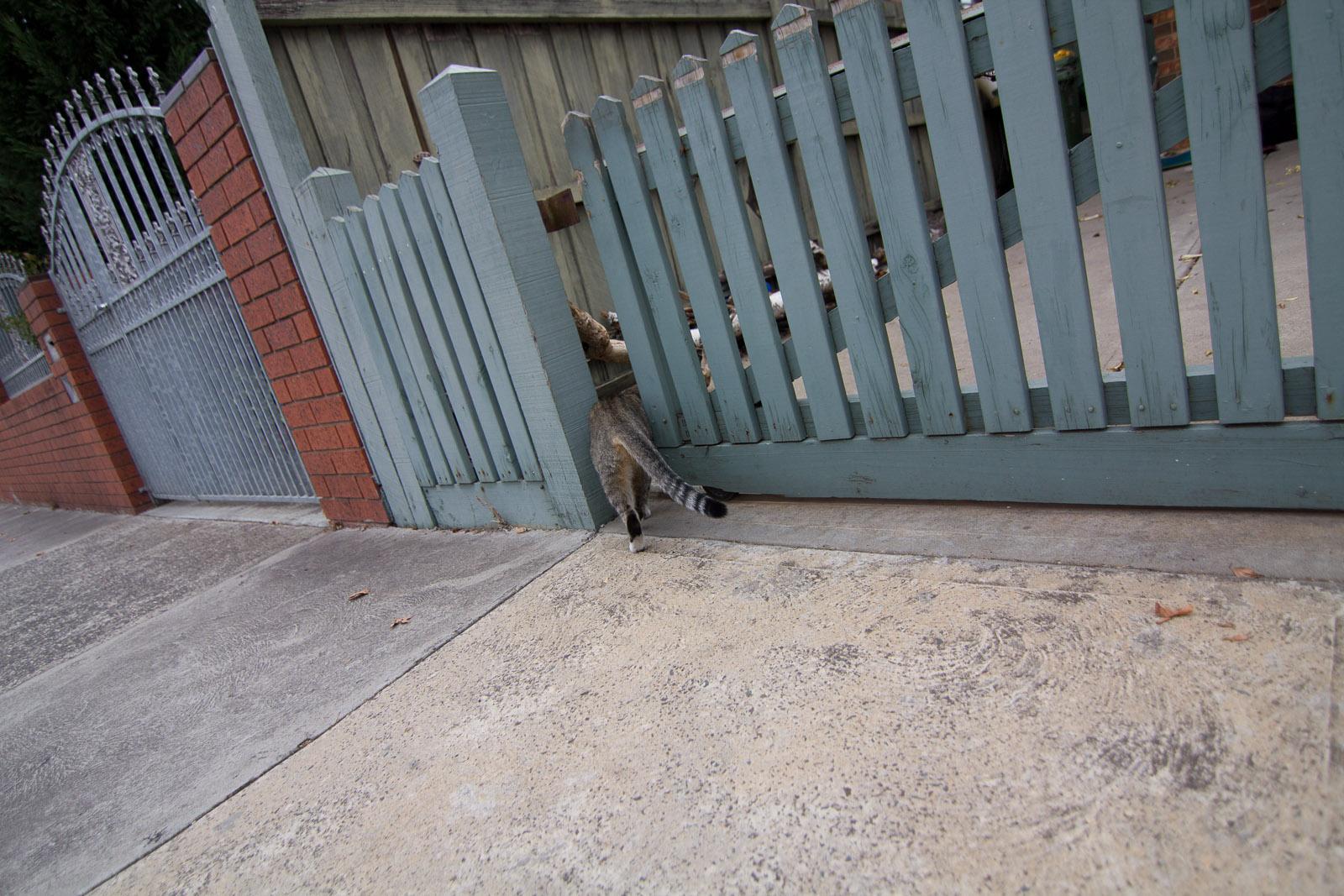 and here she is in BW, as requested 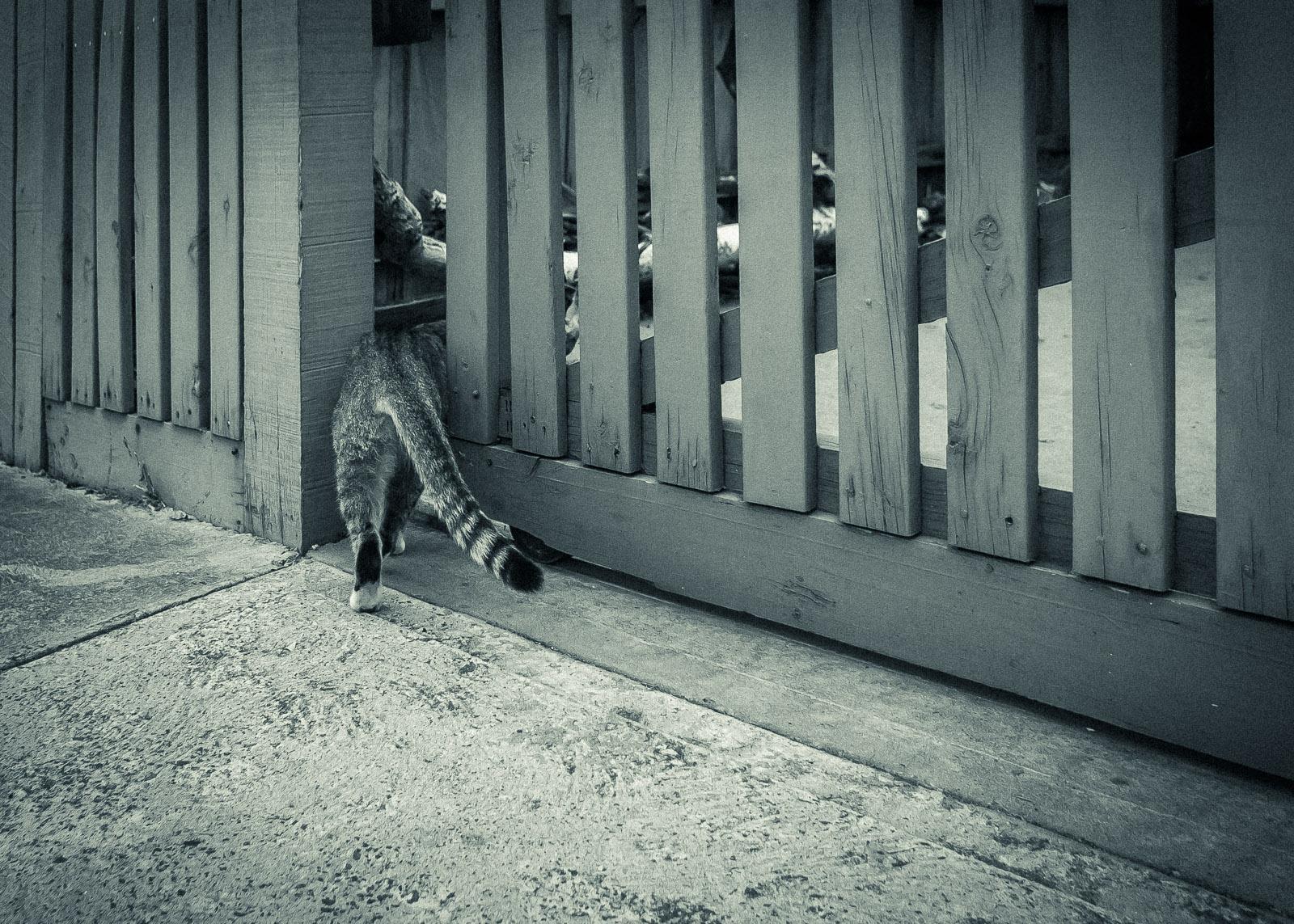 I also cropped the fence tops out on the top left as suggested. Does look better! B&W is nice, but I like the colours in the first version better.

PAN RIDER  // or what was that about trying to achieve too much at once? 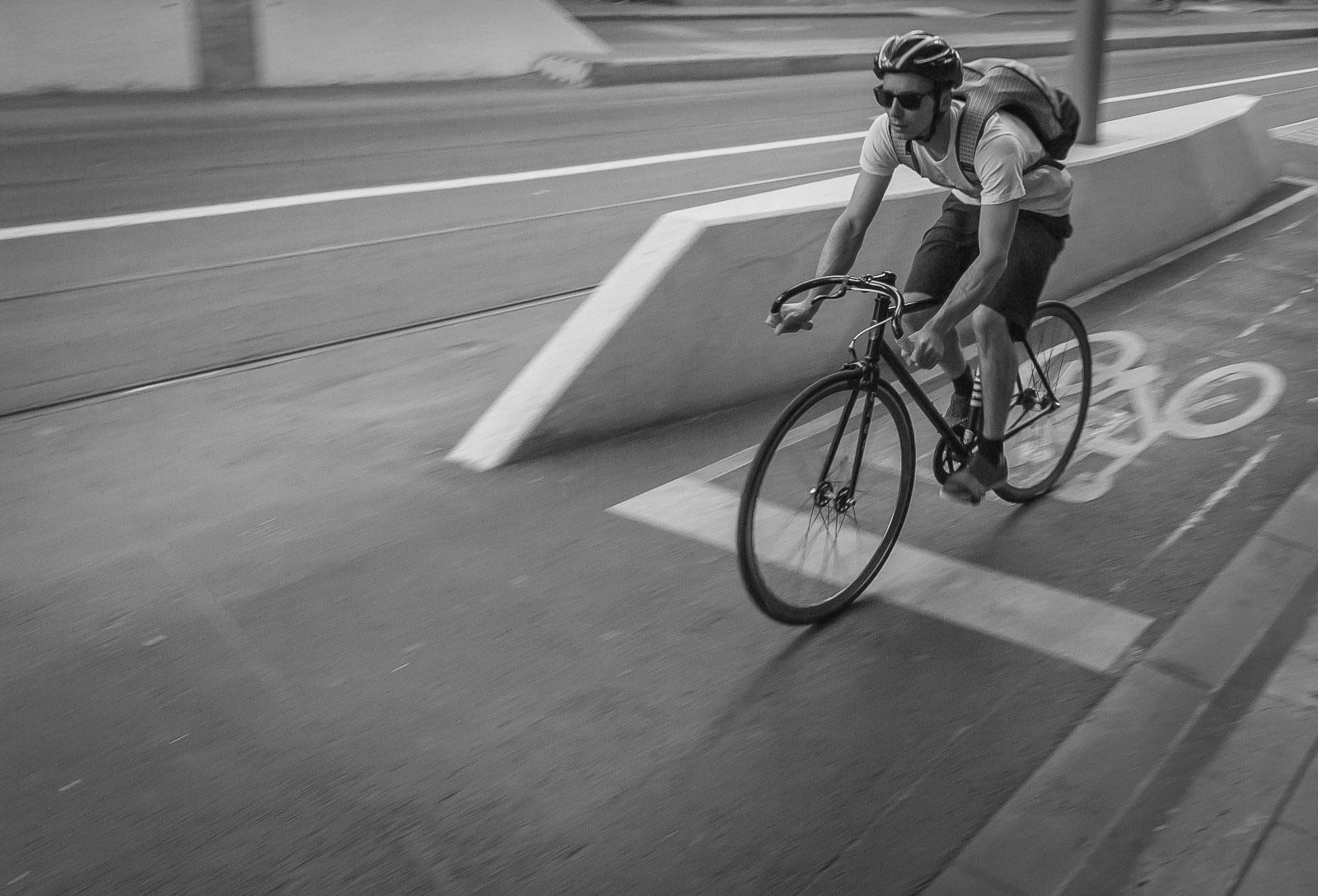 I tried my luck at a panning shot that was also supposed to get some lines. I sort of succeeded - the lines are there, but not  very strong and the motion blur is there too, but again, you kind of have to look for it. Nevertheless, at least the rider looks like he's in motion, so that's something. 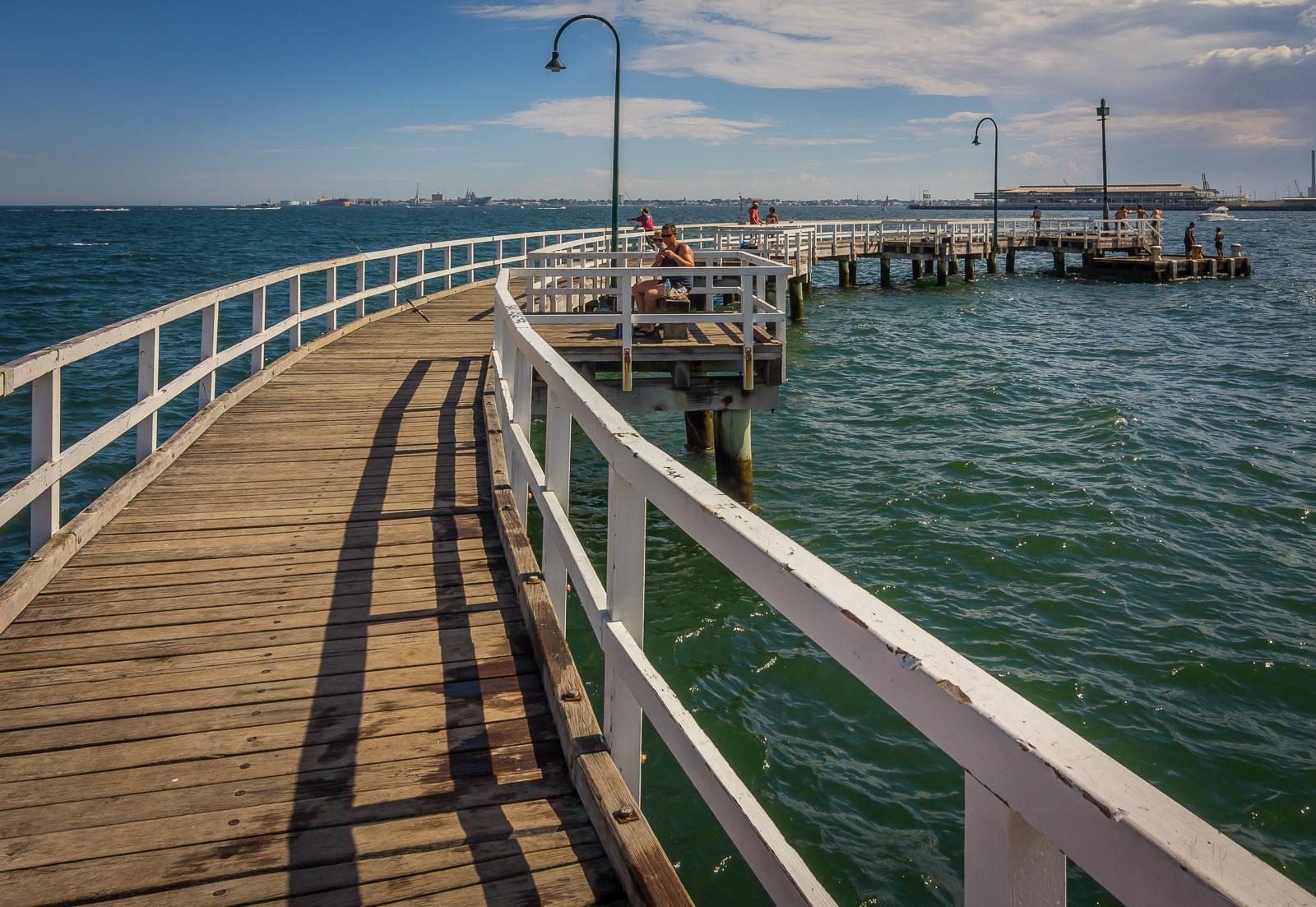 This jetty was housing quite a few fisherman yesterday and also a few photgraphers. As we were walking out, a whole wedding party was meeting us halfway, complete with photgraphers in tow. It as a curved diagonal leading line, as well as horizontal and vertical leading lines. 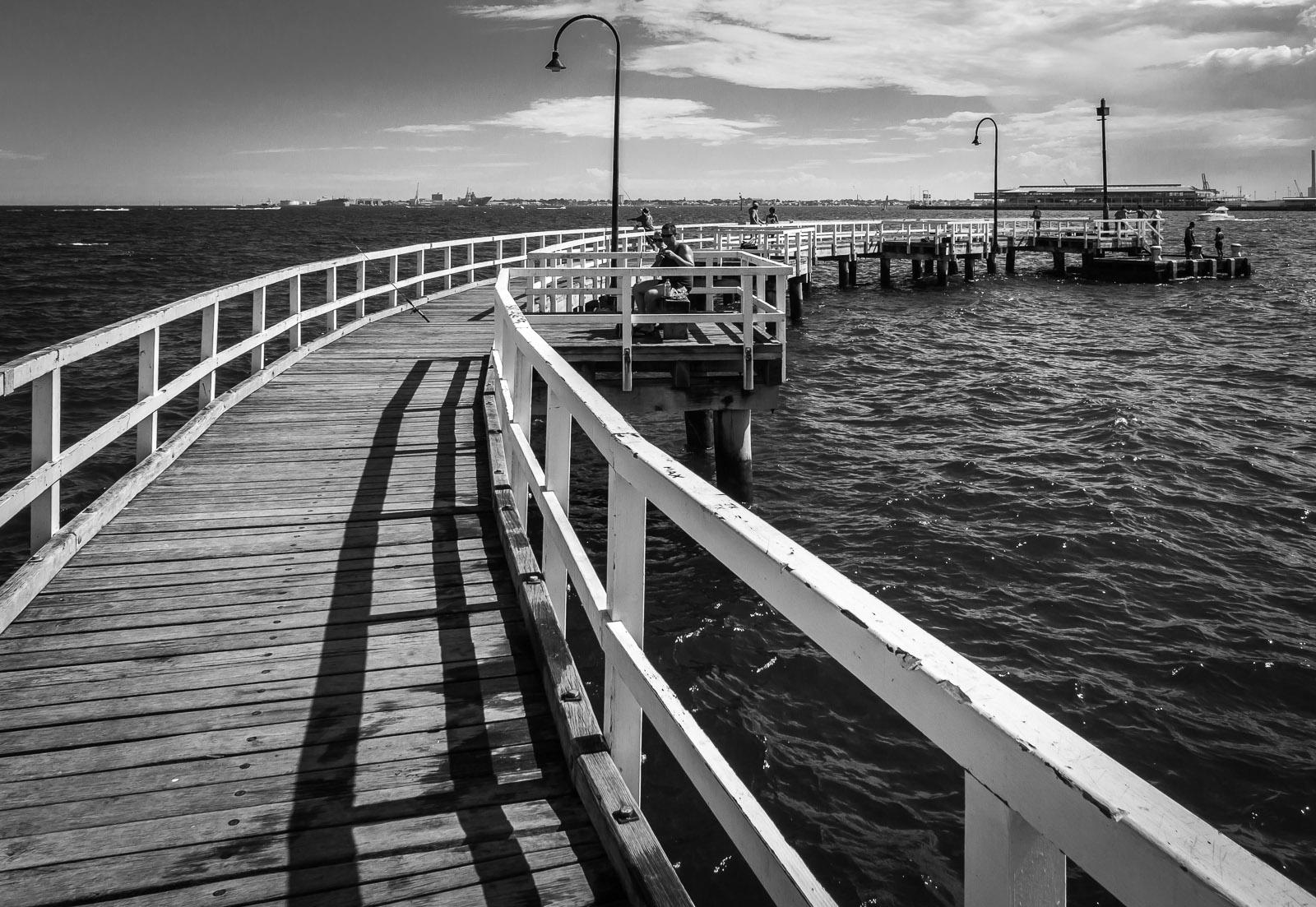 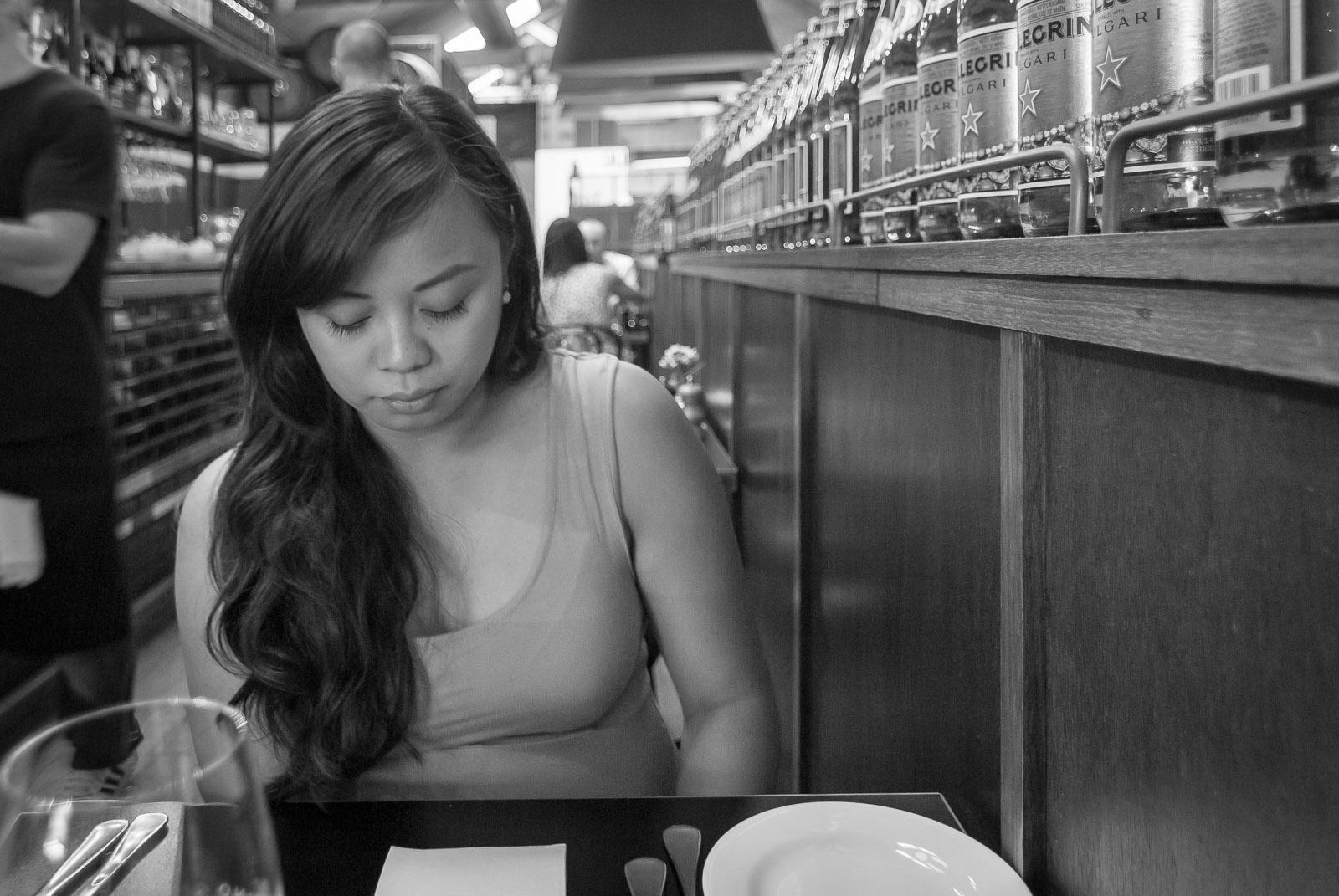 We're in the middle of the Melbourne Food and Wine festival, so my (highly pregnant) wife and I tried out a Croation restaurant called Dalmatino's. Highly recommended if you're ever in town!  It also has lines :) 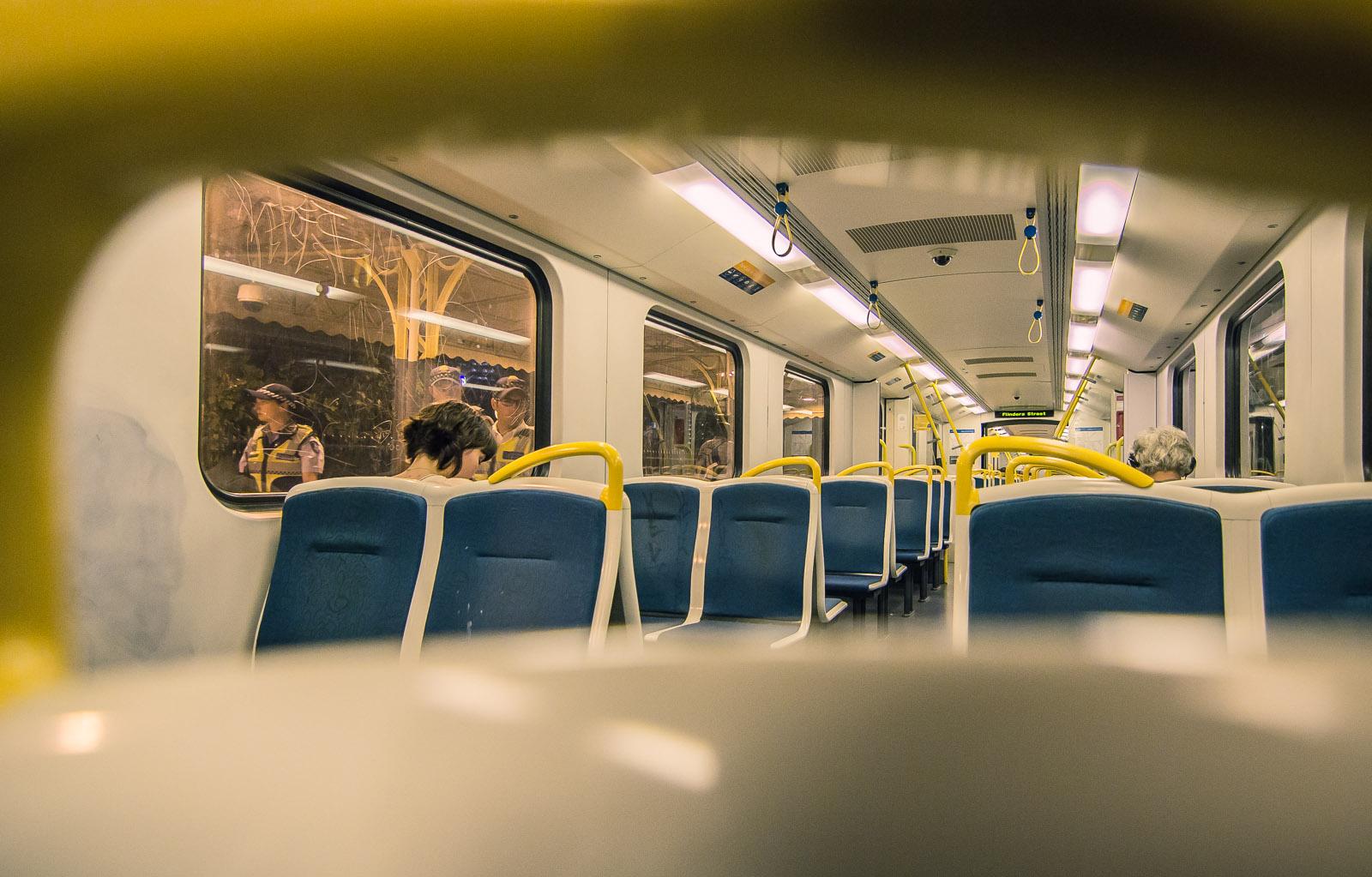 As a consolidation exercise, I tried to fit everything in - a frame within a frame with diagonals and other lines.  The station cop is looking right at me and wondering why I'm taking his picture. 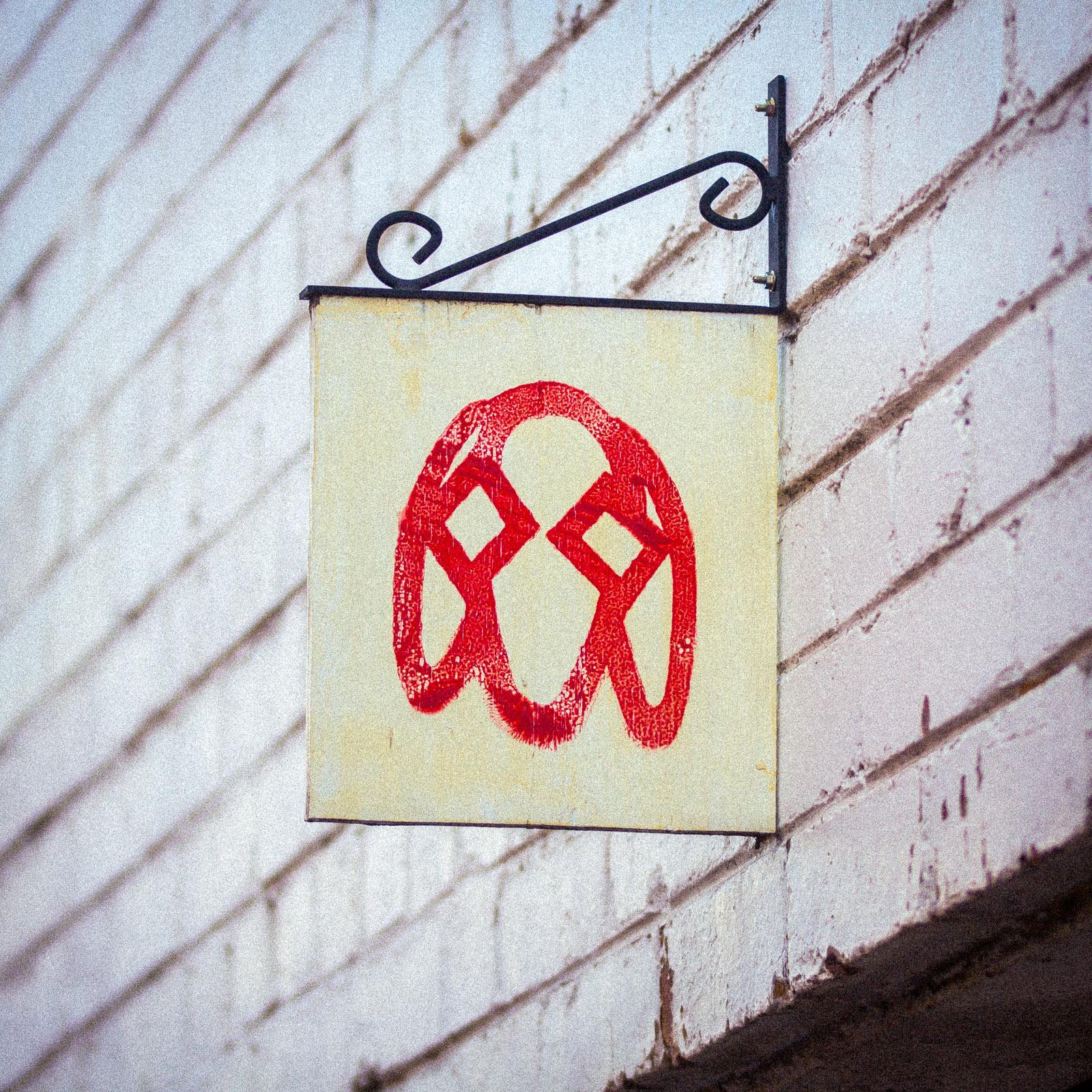 I took this a few weeks ago and liked it  - it was a random sign outside a very industrial-looking building. No idea what it stands for but it did stand out, though it was barely bigger than a square foot. Not sure if the square crop works. Please let me know :)

Larger files (including older and deleted files) are here.

My favourite lens at the moment is a Sigma 105mm/2.8 macro which I often use as a tele. It's crazy sharp and can create some pretty bokeh 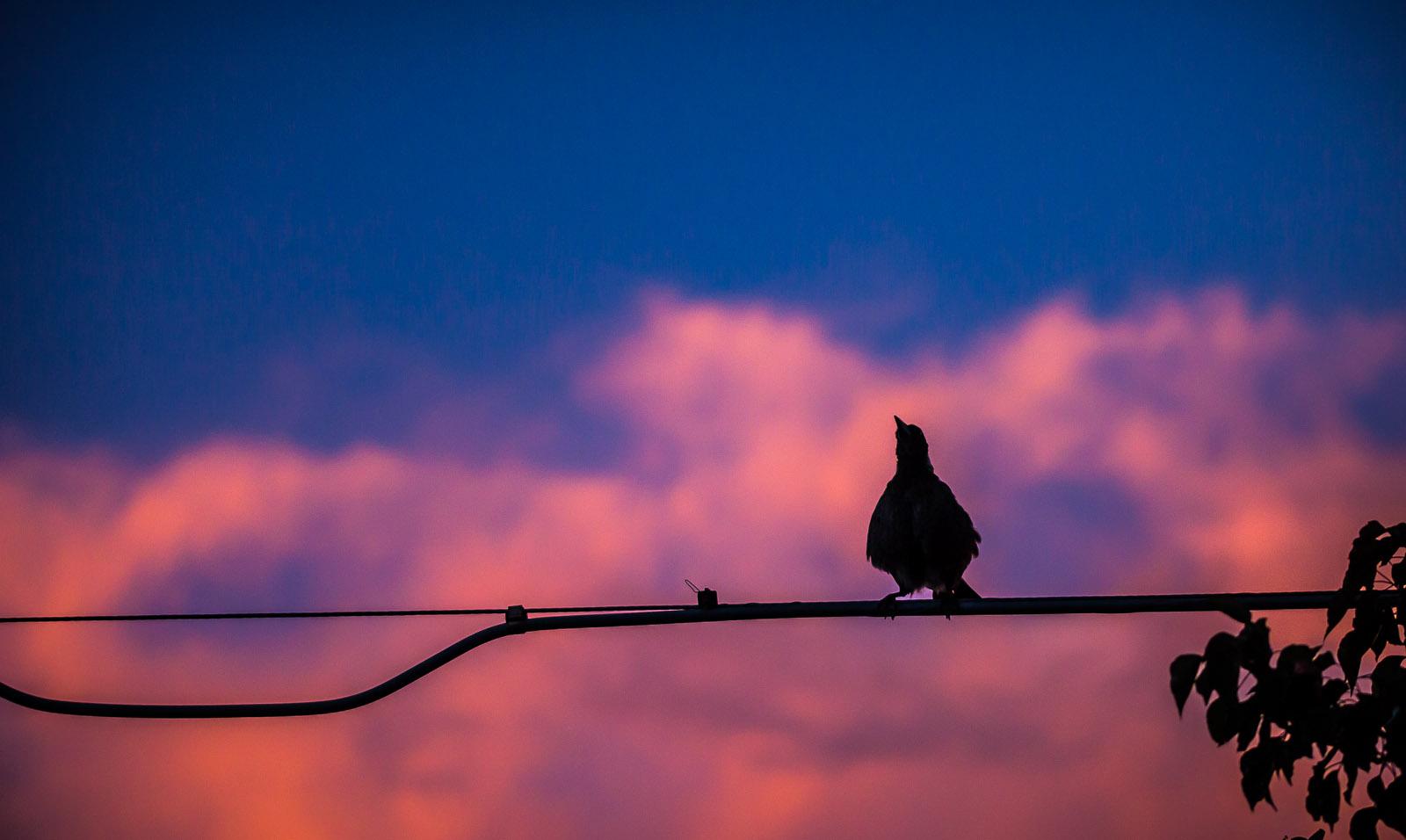 Now on the bottom right, as per Frank's advice. It does work better I think, thanks Frank!

I also added a relatively subtle vignette to draw to frame the otherwise unbound sky a bit.

I added the large files to the Dropbox link below. 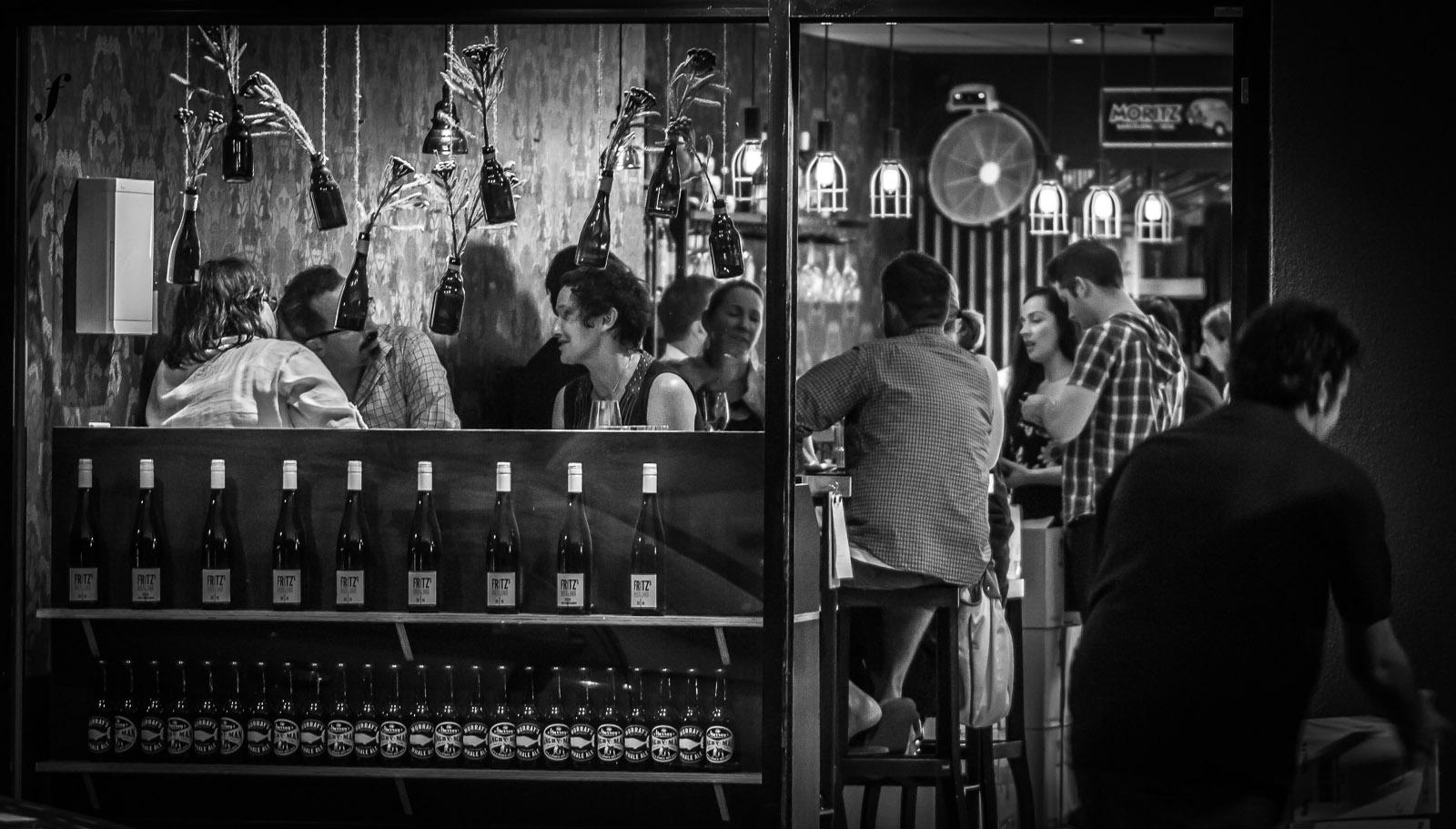 Recropped, B&W - I think this works better and you can see Jeremy unload the wine cases a bit more clearly. The downside is that the window frame is now less clearly defined. Too tight a crop? 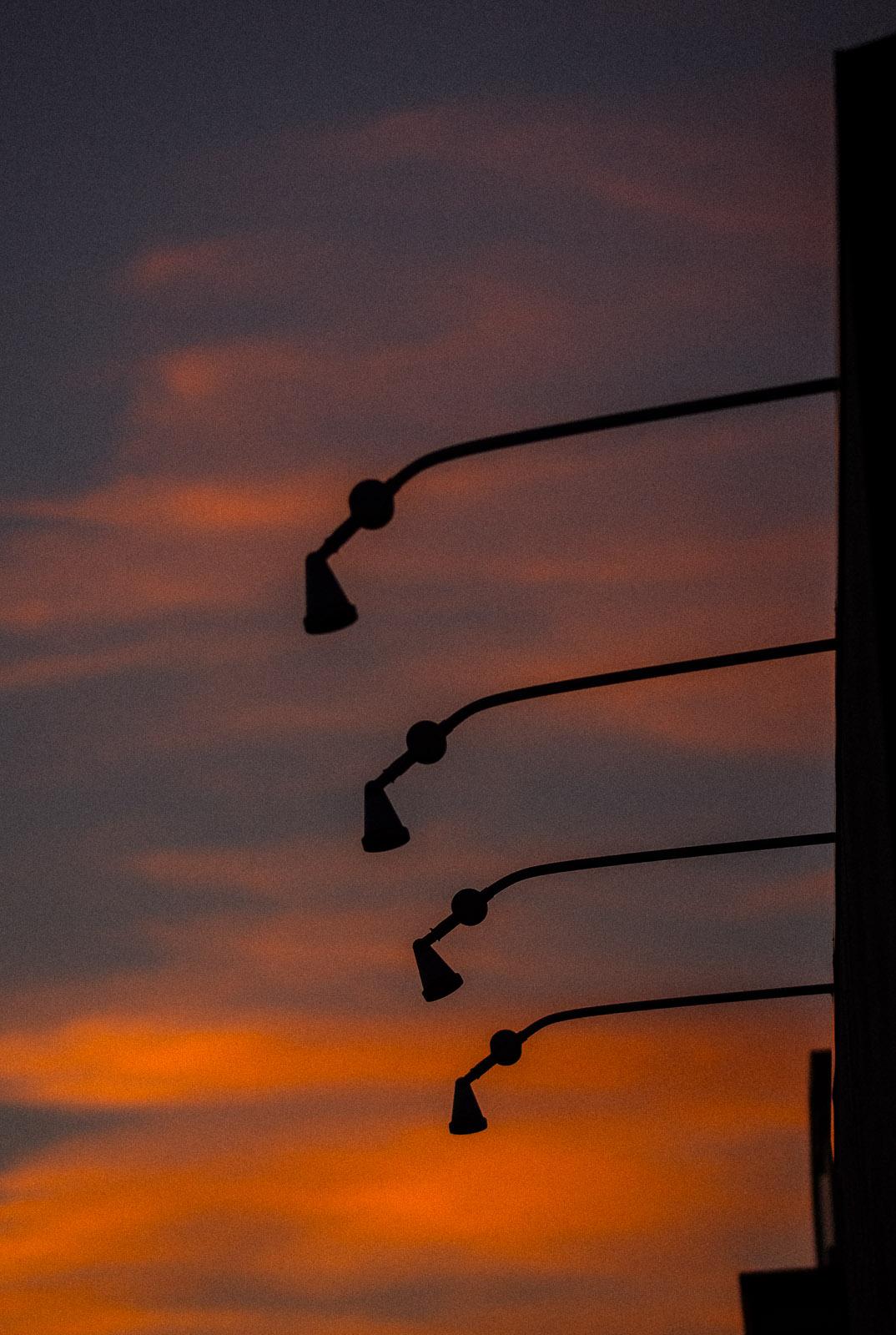 I may be pushing my post-processing a bit here (grain, saturation) but I like the slight irregularities between each of the lamps, even though they all at first seem to look alike. Well it's really the third guy from the top that's doing something different. Weirdo. 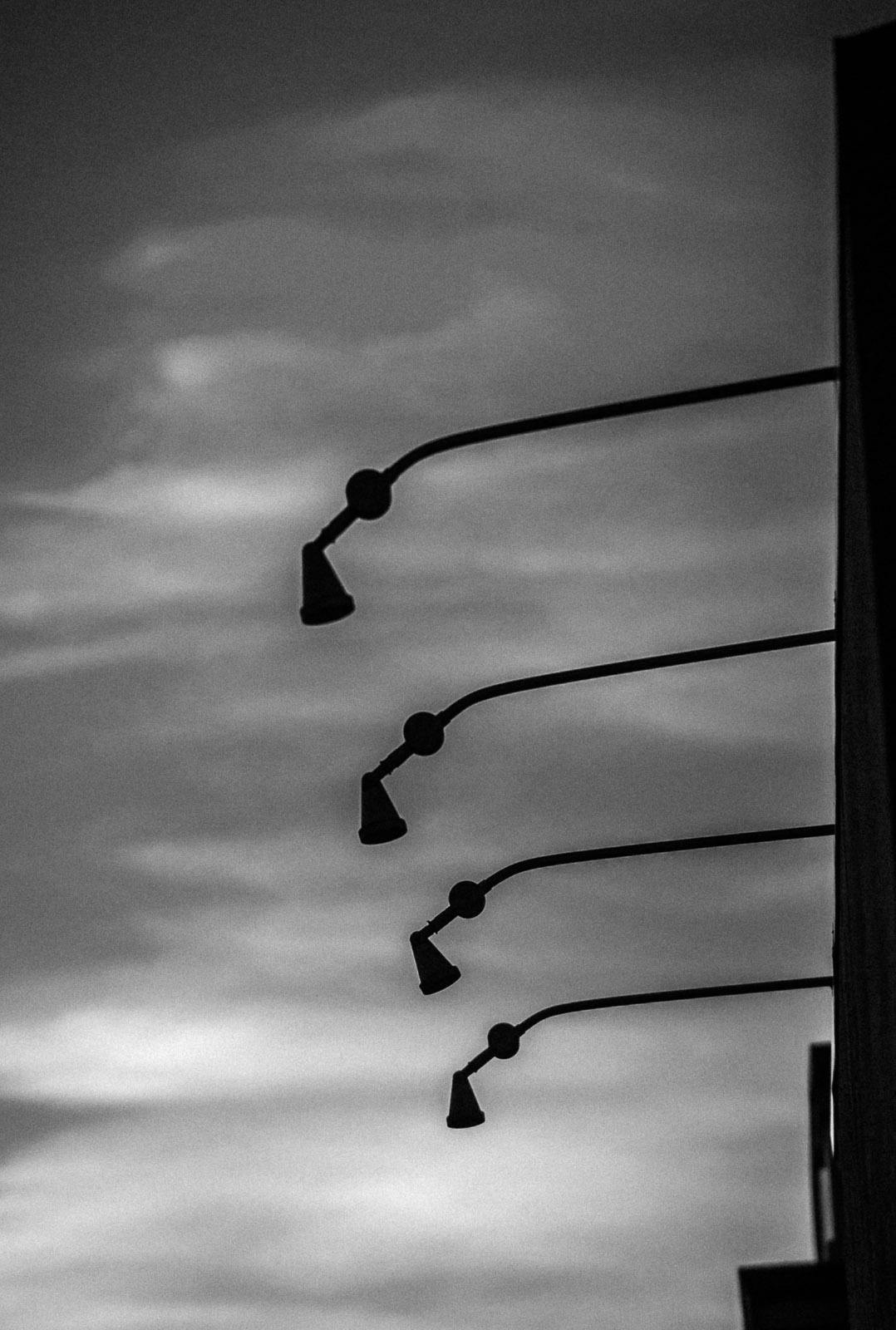 Another request from Ramon. This looks better as per Frank's suggestion I think: 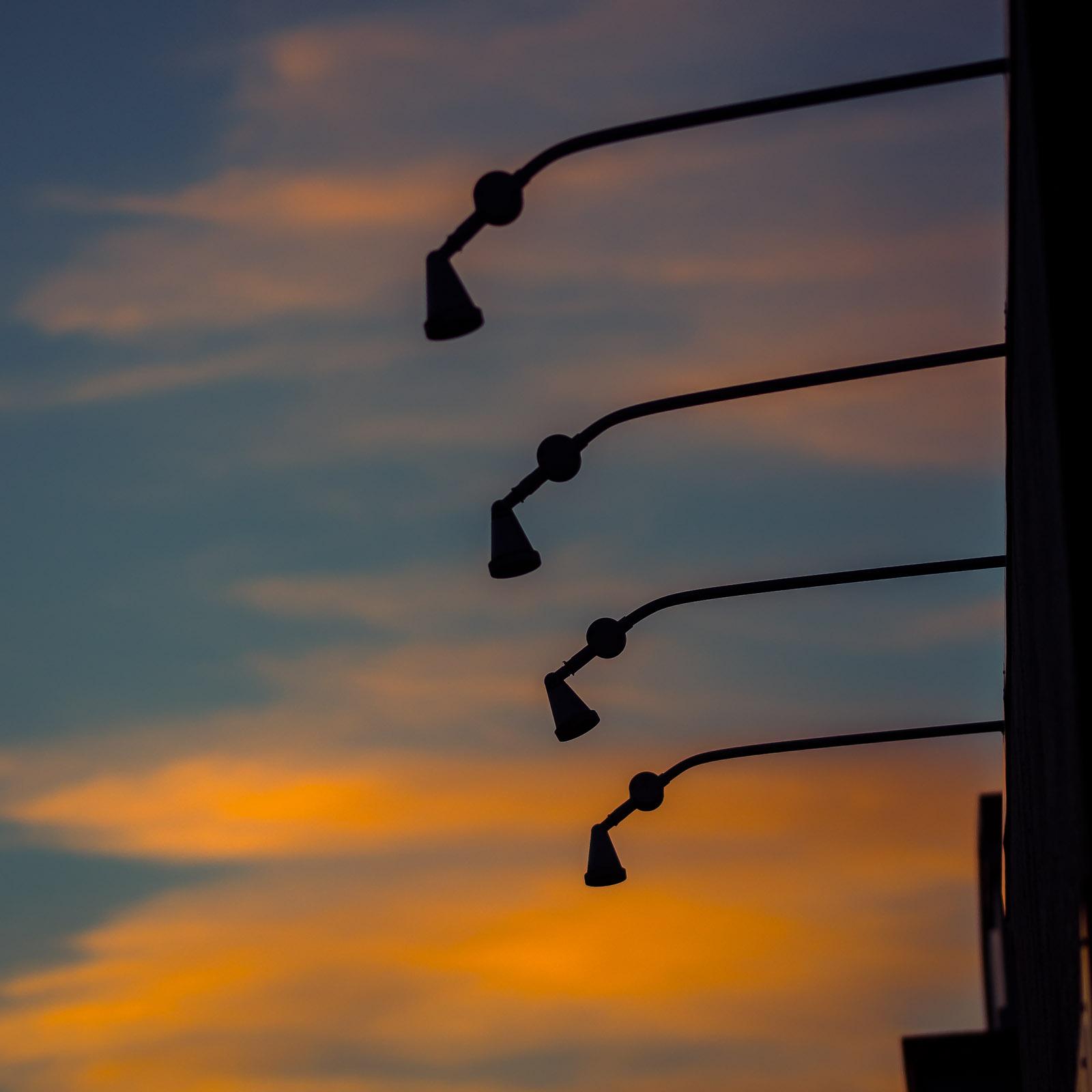 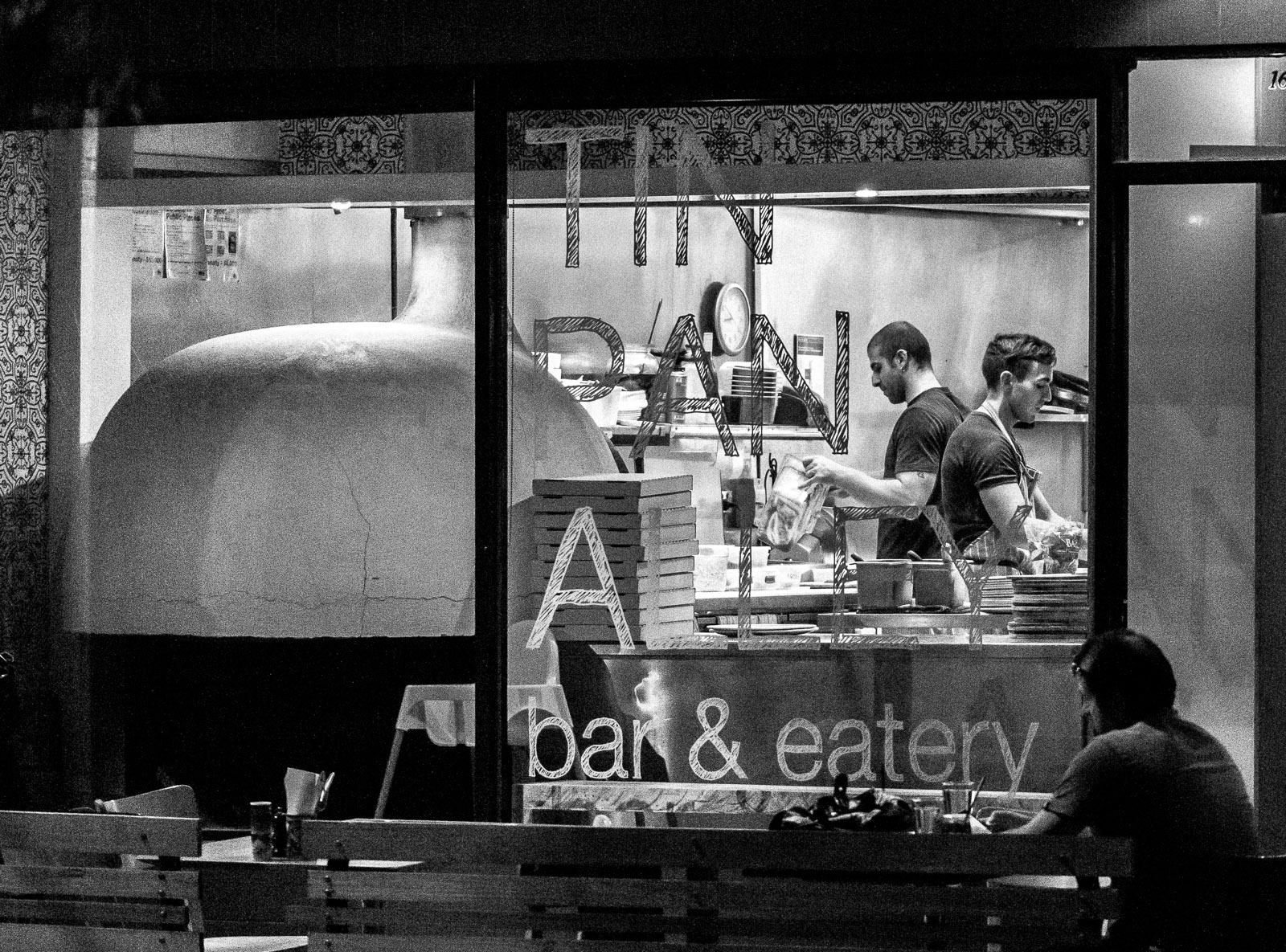 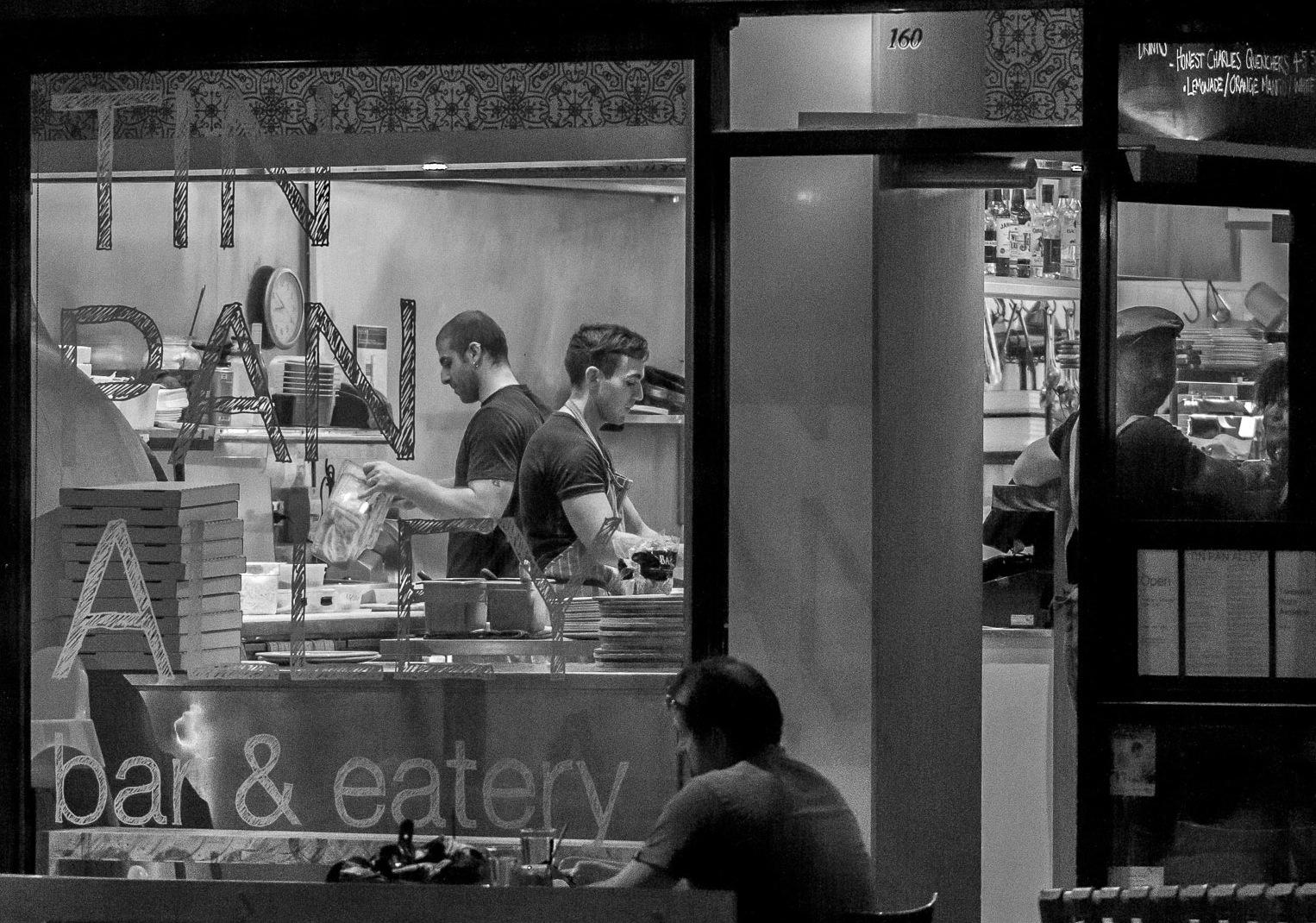 Same picture, two crops. In one, I'm the bystander, taking a picture of the local pizzaiolos getting through their busy Friday evening shift. The second crop reveals that I wasn't as unnoticed as I first thought.

Again, these would probably work better dead on, but they're both workable as is. The diner looks equally lonely in both...

HOOD PUSS  //  The ratty neighbourhood car with the yellow eyes 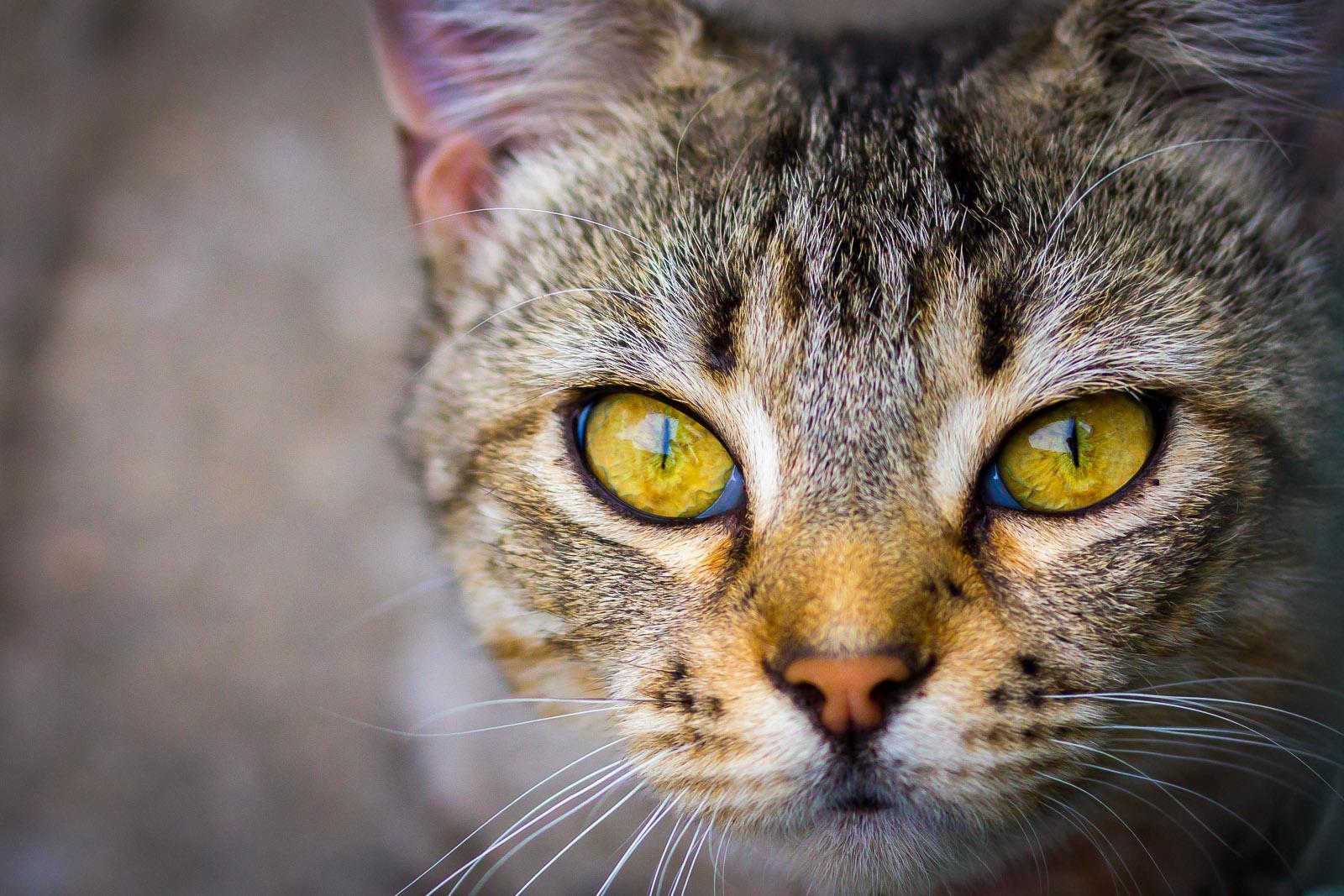 Wasn't sure where the focus is here. Tried off-centre and it worked, but I'm not sure if I've applied either rule correctly here... 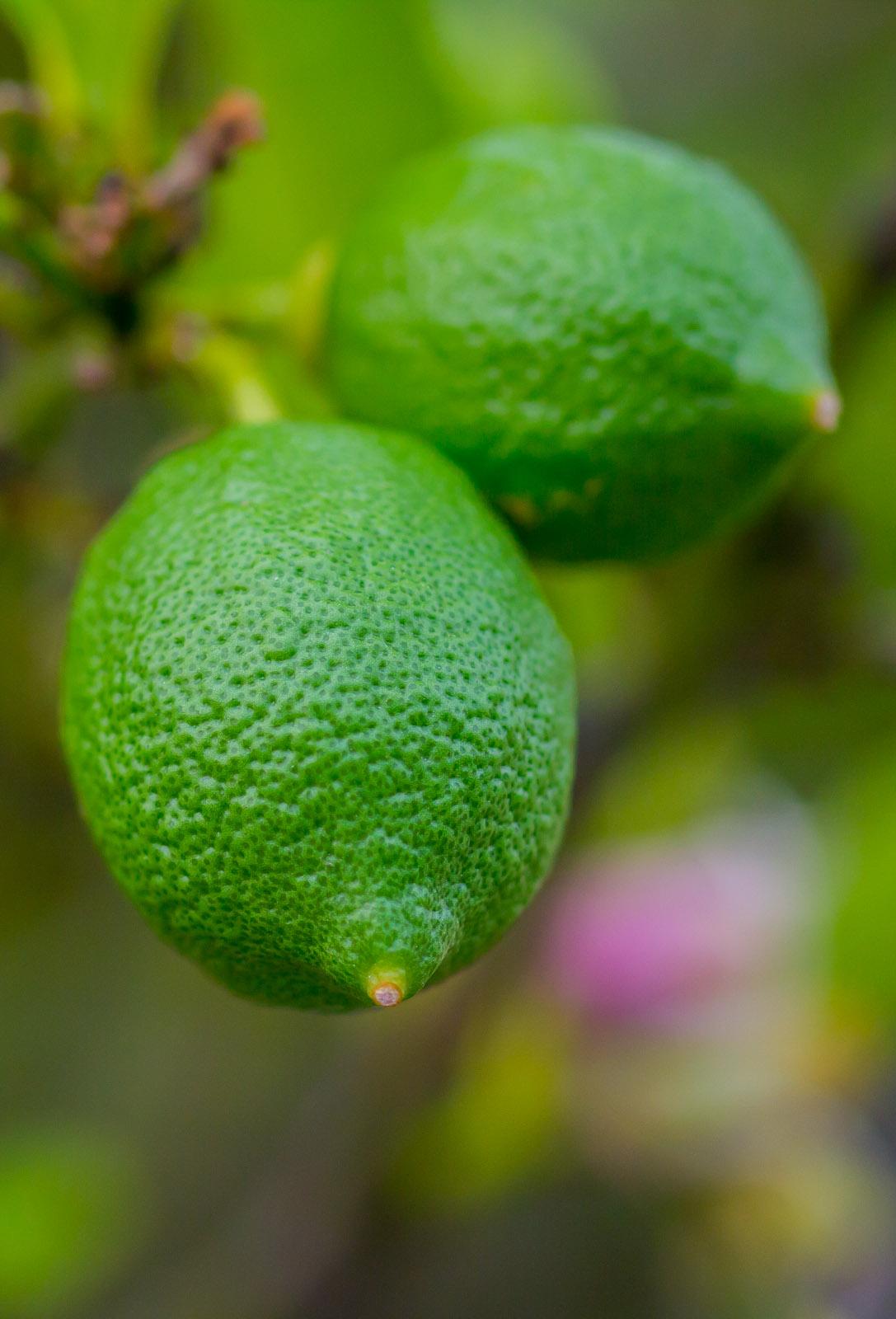 Not sure if portrait or landscape crop works better, or B&W/colour for that matter...CC welcome. 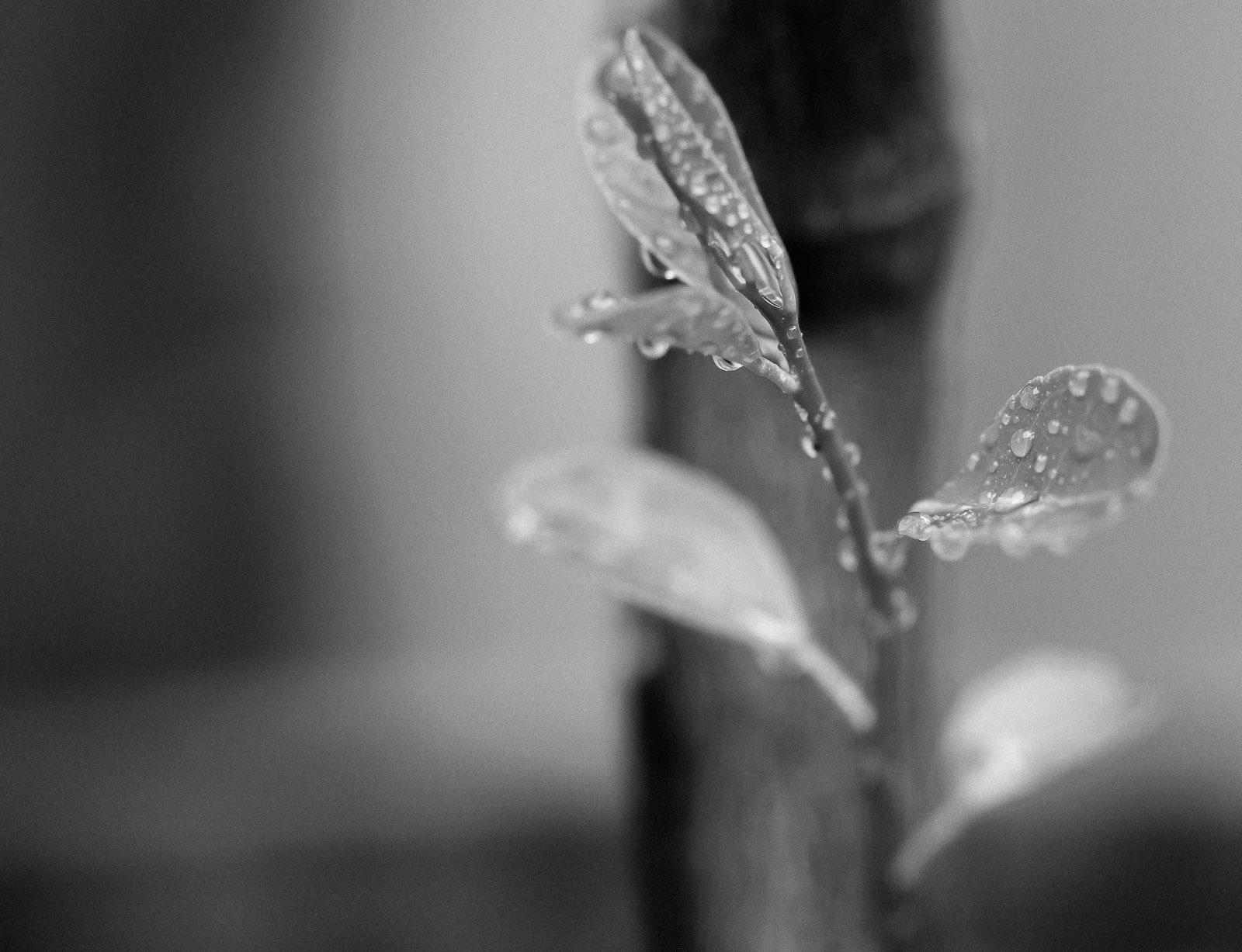 Here are  a couple of tele shots with the 105...both fairly heavily cropped. 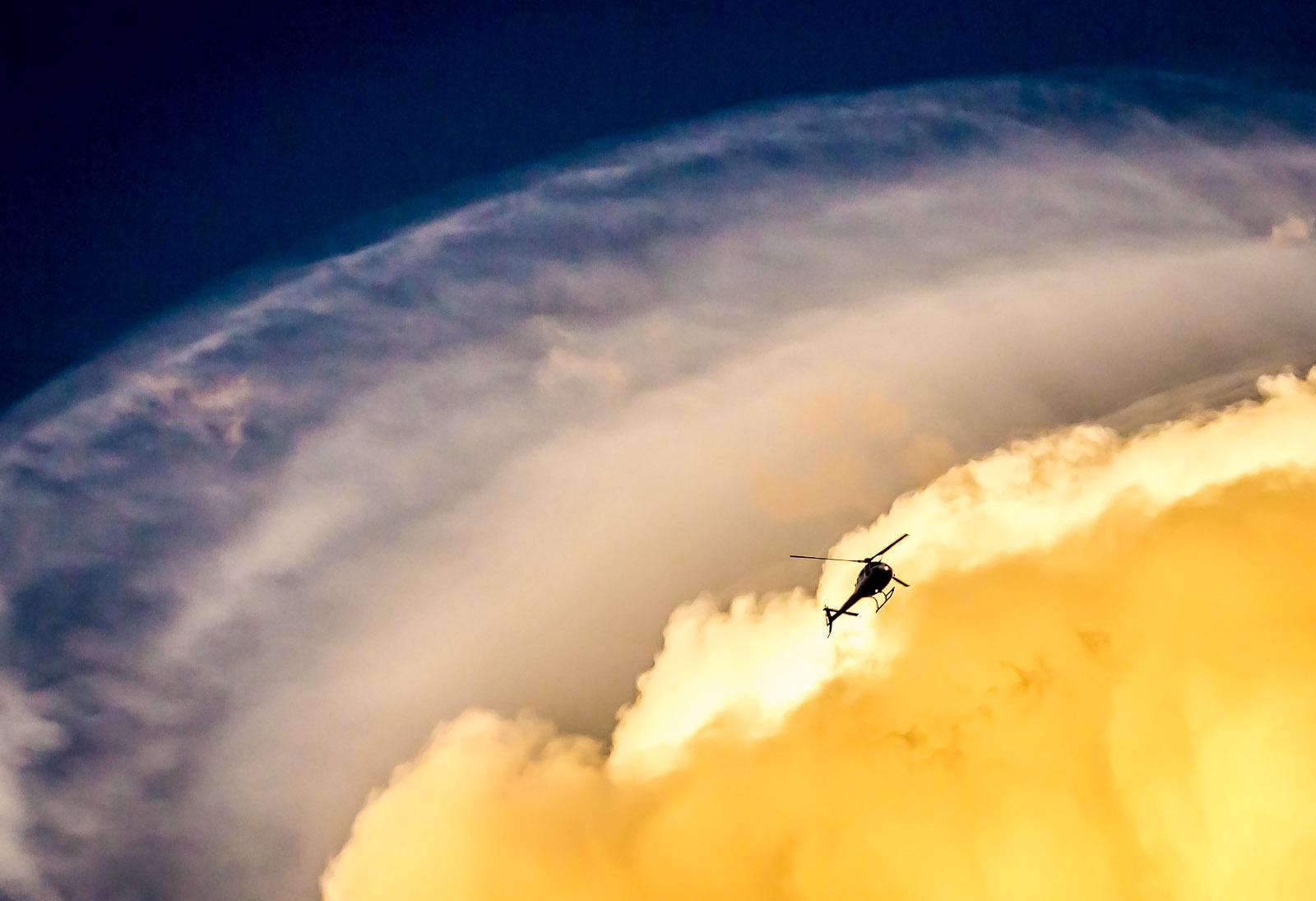 The uncropped original had the chopper smack bang in the centre of the frame. I've tried to position it in the lower right corner to fit the RoTs