Texture of a very gnarly piece of bark. I think I got a sense of texture but I can't say that it's as accurate to the original as I would like. This one was hard!

I mashed up the ideas of boxes from yesterday with the quick drawing and the colors from threads. I like the energy.

It's winter where I'm living and the leaves are all down so I've been looking at the structure of trees. I probably should have drawn these all without the leaves (just thought of that as I typed this) so I can better identify them. I also want, at some point, to learn trees from their bark.

Below is an older drawing, which served as a jumping off point for today's work. It's a bit fantastical but I think it's a lot cuter (however I might be a little surprised to see some of those shapes in the woods).   ; )

I transformed the drawing that came out of the cloud exercise. Lots of black marker over the things I didn't like and a paper cut-out over another part of it and now, a tight crop, and now a whole new image.

What I learned was that I was really bothered by the inconsistent proportions of the original. There was an enormous bird and a tiny bird and they just didn't work together.

These drawing are  in a sketchbook that I have called the "blackout book" that in a way is much like this assignment. I can start with anything I want and then slowly cover it up with black until I have something I like. The rule is that the edges of the page have to be black. So I was ready to cover this up entirely if need be. Luckily, I didn't have to post an entirely black page.   : )

So I did a before and after - the second with minimal detail added with ink. I think it could even benefit from some white highlights but I'm pretty happy with this version as is. Actually, I think I should draw spools of thread more often - such an opportunity to play with color!

I love to sew so have lots of spools of thread. This was a fun one to draw. Done with a folded pen and ink.

Colors of my day with an outsized attention to cranberries, green patchwork, and a nighttime walk in the woods.

it pains me a little to see that there is little cohesion in my work...so many styles.  It doesn’t look like one person made these. Kinda crazy.

The crowd full of creatures. So maybe not quite a crowd.

Metamorphosis full page - done in procreate. Working on the ipad, I get to let my drawings go through metamorphosis themselves; or isn't any drawing really that process? From blank page to full. A metamorphosis. Typing it, it seems pretty obvious.

This turned out to be a combination of slow and journey.   : ) dine in Procreate

Cloud done with a variety of water based and acrylic markers

Journey done with a variety of water based and acrylic markers

A curious person armed with markers. 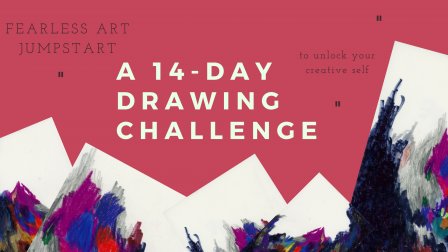