Well; this was harder than it looked

My solder paste is quite old! I bought it in 2012, and keep it, capped, in a box with my borax cone and dish, so it is still very moist. I never really got on with it - I only bought it because it was so hard to cut down solder before I put it through a rolling mill (that was worth the evening class, just for the use of the college rolling mill!). I thought this project would be the perfect thing to use the paste on. Unfortunately, the label's got so damp, I can't tell which type it is, but hey, I figured it wouldn't matter as I had already decided to hang my daisy rings differently.

Well; I have decided I shan't try my paste again!! I don't know if it was because the paste had gone off (can it go off?!) or I was using too much, my balls were too big or simply that I am rubbish; but I struggled to fix my balls using it.

I had a couple of goes, and then decided to try another pair in case it was the wrong weather, using traditional hard solder.

This pair worked first time, and fully! What I did to stop the solder from shifting, was melt enough pallions into tiny balls, on a separate block, then apply flux to ne joint at a time, after preloading a solder ball to my pick, I could then let the surface tension on the flux pull the solder from the pick into the right spot. I did this for all of daisy one, then by the time I had finished daisy two; #1 was dry enough for me to apply the torch without any risk of the solder shifting. These worked first time, and fully - but my balls were a little smaller ;-)

I'm going to try to upload a couple of photo montages (I hope they look better once uploaded) - my soldering set up (ie the kitchen) and the working and failing solder attempts in the first and the finished earrings in the second - in homage to your lovely bowl, Jo; I used my tea cup this morning!

I love as much movement as possible in my earrings, so I like to articulate them whenever and wherever possible, and I also love a gemstone. I've used some jumprings made with a medium wubbers bail maker plier (larger bail) some 3mm freshwater pearls and a couple of faceted prehnite rondelles to make these feel really fresh and spring-like. I love the look, and have lots of ideas for other things to use these balls for, so - as usual - thanks Jo!!

- and I made some studs with my failures too! 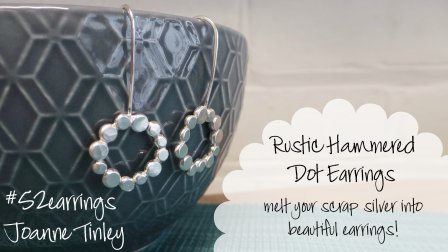