R is for Ray

Thank you so much for enrolling in my class! I hope you can learn a lot from my video lessons!

I'll start off by saying, I love art! In high school, I remember finding ways to spend as much time in the art room as possible. Since highschool, I've gone to college for design, worked for a couple years as a package designer, and now I am focusing on my freelance career as a lettering and graphic artist.

I had the idea for this class after I made a project for my Lettering & Design newsletter. I hand lettered the word "Spring" and the illustrated it in this style, and after making it, I had the thought, "woah, this style is actually a combination of a bunch of skills I have acquired over the years from school, work, and actually ... Skillshare classes I have taken!".

So with that, I decided that I could teach my own class where I share my unique process. So here it is!

I decided to hand letter and illustrate the first letter of my name, and since I just went through this entire process to create the word "ART" in this class's header image, I decided to base my letter on the concept of art and specifically painting. I figured since the class is all about making art, and I love making art, it just made sense to stick with the topic for my own project.

The mind map for my letter was the basically the Painting section of the mind map I created in the video lesson. Remember the mind map isn't set in stone; it's basically just a jumping off point so you have ideas to work with during the concept board step of the process.

I did decide to create a new concept board for my letter to have it focus on the painting elements I wanted to include in my piece. After doing some searching around the internet for images related to painting, I was able to expand upon my ideas from the mind map, and this is what I came up with:

Once I had my board all put together, I jumped right in to hand lettering my letter "R".

After drawing the shape of my letter, I started to draw the elements of my concept board within the letterform. During this stage, It's all about thinking, "How can my obejcts relate to my letterform in some way." For instance, since I drew the leg of the "R" to be curved, I drew the paint tube to mimic the curve. And in the same way, the straight paint brush mimics the straight stroke of the stem of the letter. If you've got an object that could naturally be bent, this is an opportunity to draw the object in a new way that will compliment your letterform.

Once I had my illustrations figured out, I scanned my sketch and moved into the computer. The first thing I did was create the shape of my letterform with the pen tool. These shapes would act as the backdrop for the rest of my digital illustration.

The next step I took was to create shapes of flat color like this letter "R", for the illustrations I drew within my letterform. At this stage, you don't have to have the colors figured out, this stage of the process is more about making the shapes. Honestly, its the most "work" you have to do to create this project! But once you have these shapes, you can start to chose the best colors and add texture. And who doesn't like to color?

Once you have the flat shapes created you can start to have fun with texture, shading, and depth. I decided to start by texturing the letterform first, and then continue on to add texture and shading the rest of the objects.

Next I added texture to the flat shapes I created a couple steps ago.

Finally, nnce I had both the letterform and the objects created, I was able to bring them both together and add suble background so the letter wasn't sitting on a stark white background.

So that's about it!

Like I said in the videos, this was my first time ever putting together an online class, so I may have glossed over some things that were obvious to me, but most likely totally new to you. If you have any questions, please feel free to write to me and I'll get back to you as soon as I can! 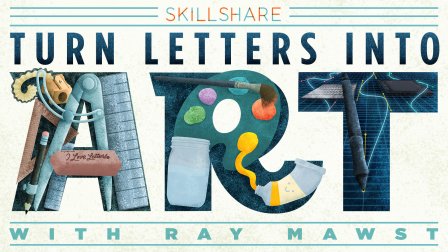