I just wanted to show you what a project could look like!

So here is a photo of my first, second, third, fourth and fifth artistic experiments! :)

I had a lot of fun with this one and really liked the grittiness of the chalk pencils I was using. Things I learned were that if I used a wet brush in the chalk pencil, it could create a cool texture that was simultaneously 'gritty' yet 'flowing' with the brush stroke.

The title page was a fun thing to do though as I showed you in the video, I felt that I could have explored the typography much more than I did in this specific drawing. What I basically learned is that when I'm feeling 'rushed' (I didn't have much sunlight left to film the timelapse and so was trying to hurry), then my creativity gets a little broken down and I don't have as much fun. So these are things I want to keep in mind for the future: make sure I don't feel rushed when I'm starting a drawing :)

This is the second part of the third experiment and I really enjoyed this one. I often draw to music and since this is something I often do, it feels comforting and I'm really able to let myself go with the flow. I'm pretty happy with how it turned out, and with the discovery I made: when I use pencil in wet watercolor, it creates a super interesting texture that is darker than the parts around it. Points to take with me for the future would be that if I did it again, I would make it smaller so there would be more space around the drawing - and I would play with the watercolor textures even more.

... and here is where it brought me in the end.

I had so much fun with this drawing and loved engineering the mistake. In my own practice I've actually rarely done this on purpose like I did here (I've mostly learned this technique because of 'mistakes' that naturally arose, which I had to deal with). And what I learned is that I actually really like doing this! So I think I might engineer 'mistakes' more frequently. :) 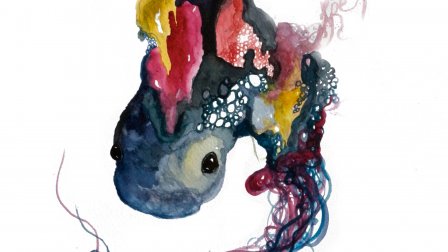