My process for getting there:

This will be my first time using After Effects.

I'm planning on staying close to the course example but adding some of my own flair.

I'm going to add a minor twist at the end.  The green light will blow out and the "Go!" will roll out the side  rather than sliding out like "Ready" and "Set" did.

Plan "B" (if sparks and smoke prove too time consuming to finish in time for the workshop) will be for the green light to flicker out before "Go!" rolls out and falls over.

The attached graphic is only meant as a "sketch" of what I'm planning, I don't expect the finished project to literally look like it.

I went through the class and essentially copied the instructions while I got used to using After Effects.

Some of my notes from going through the course:

What is "Easy Ease"?  This 2 minute Youtube video does a great job demonstrating and explaining it:  https://www.youtube.com/watch?v=UVox_2py9yU

Just in case anyone else runs into this problem... During conversion, I ran into this error.

Which leaves me with a complete initial stage to work from.  It's essentially the same animation as Sebastiaan's.  Part way through I discovered I rather liked switching the text to italic during movement sequences.

Phase 2, touch-ups and the malfunction

I added a "Bevel and Emboss" layer to all 6 of the light layers with a "Softness" property of 15.  This gives the lights a more rounded appearance

I also added a drop shadow to the traffic light body and set Opacity=75%, Angle +120 degrees, Distance 5 and Size 15 (to soften the shadow).

To do this, I created a new "Solid Layer" (background color doesn't matter) and then applied the "CC Particle System II" effect.  For the biggest burst of sparks I used the settings below:

For the second and third spark bursts I made copies of the first spark layer and dialed down the velocity and birth rate a little.  In all 3 spark layers I used keyframes to go from a birth rate of 0 to the max for that layer within 1 frame and set it back to 0 few frames later.  Turning off the birth rate stopped new sparks from being created, but the existing ones still lived for their expected lifetime.

Initially I had the green light going out at the first burst of sparks, but after playing around I found it much better looking with the light flickering back on then off with each burst.

Side note:  All 3 particle system effects were really fun to play with.

I ended up using "Particle Playground" for the smoke.

Setting the gravity to -10 sent the particles upward rather than falling back to earth.  I set the color to gray with a blue tint (reflecting the background), increased their size to 3 and then added "Radial Blur" which changed them from a 3 pixel square into a blurry grayness that looks reasonably like smoke.

For the falling letters, I put each one on its own layer (or more accurately, I setup "G" and copied it to create "o" and "!".

Then I created keyframes at the beginning and end of life for both "Position" and "Rotation" under the text layer's "Transform" property.

After a little trial and error I ended up setting the rotation end keyframe to 2x+172.2 degrees (2 full rotations plus an additional 172.2 degrees).

Of course after getting them all to rotate around the center, I ended up shifting the anchor point slightly on the exclamation point and "o" for more wobble on the way down.  It was kind of anti-climactic to have them roll out in a nice orderly fashion and the the wobble adds a little chaos to it.

For "Position" I used the "Convert Vertex Tool" (one of the options under the pen tool icon) to drag the end point of the path down and adjust the curves so the letters would come out and then fall down rather than going across to the right like "Ready" and "Set" did.

I had to play with the number of frames and the starting point of each letter's layer in the timeline to get the letters moving, rotating and spaced right, but eventually got them where I wanted them.

I gave it a couple of denouement seconds at the end, after the letters fall, to let the smoke drift upward and let the events sink in.

And with that, here is my result: 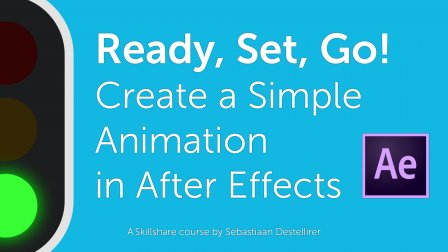